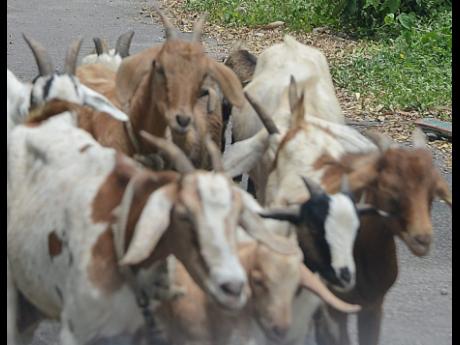 Thieves struck in the farming community of Gimme-me-bit in Clarendon on Tuesday, taking with them 25 goats.

The criminals also killed a pit bull that was watching the animals and severely injured another.

Owner Roland Foster said that about 12:30 a.m., a relative heard a commotion in the yard. Two pit bull dogs in the yard had attacked the intruder, but they were overpowered by the thieves.

Deputy Superintendent of Police Lilith Campbell told THE STAR that 23 of the 25 stolen goats have been recovered near the Garvey Maceo high school in the parish. The other two animals were slaughtered. They are valued at $30,000 each.

“This is an ugly situation but we the police of Clarendon are extremely militant and we intend to put a dent in the number of praedial thieves roaming the streets. We are appealing to farmers to get registered with RADA and to corporate with the police and also to report all forms of praedial larceny,” DSP Campbell said.

“To the praedial thieves keep out, keep out of the parish. We are determined to catch you and we will seize your vehicle and we will arrest and prosecute you vigorously,” she warned.

DSP Campbell is asking the hospital staff to enquire of persons who turn up with dog bites and to report suspicious stories to the police at 119 or 986-3233.