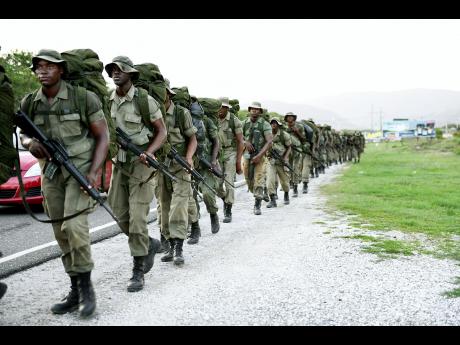 @Normal:JDF recruits marching along the Municipal Boulevard in Portmore, St Catherine, in May.

The Jamaica Defence Force (JDF) is urging persons interested in applying to the Jamaica National Service Corp (JNSC) programme to be careful about what they read on social media about the programme and the application process, and to be wary of unscrupulous persons posing as JDF recruiters.

The warning comes in the wake of approximately 2000 persons wrongly turning up at Up Park Camp on Monday to be interviewed for acceptance into the JNSC programme.

According to Major Basil Jarrett, the JDF's civil military co-operation and media affairs officer, the JDF typically interviews and tests approximately 60 to 80 applicants daily and so Monday’s turnout was extremely unusual.

“Before anyone is called to do the interview and test, they would first be required to complete the application process online before they are notified to come in. A large number of persons who showed up today had neither applied online nor received a phone call and when we enquired as to what prompted them to show up, we were shown a social media posting that was circulating online," said Jarrett. "The JDF did not put out that post and so we are warning applicants that they should only rely on information posted on official JDF social media platforms and mainstream news for information relating to their applications or the application process.”

Among the applicants who showed up, were persons who were travelling from as far away as Westmoreland and St James.

The JDF opted to register and process some of their applications. This, the JDF warned, is not the norm, but was done simply out of consideration for the distance that they had travelled.

The JDF said that as a rule though, all persons applying to the JNSC programme must register initially on the JDF’s recruiting website jointhejdf.com and wait to be called.

Jarrett added that "there is no application fee or other costs associated with applying and so persons should be immediately suspicious of anyone trying to hijack their enthusiasm by ‘selling’ them a spot in the organisation.”

The JDF says it will also be investigating the origin of the false social media posting and will update the public accordingly.