'It caught me by surprise' .... Koffee didn't expect to rise so fast 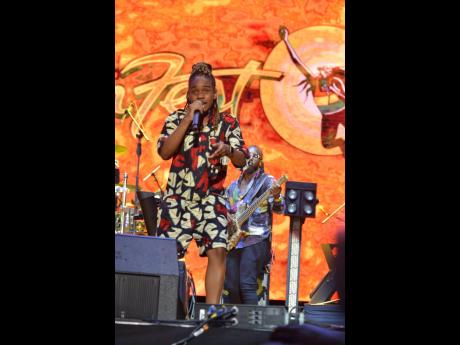 Young reggae sensation Koffee has named her appearances at Reggae Sumfest on Saturday morning and her showing at Buju Banton's Long Walk to Freedom concert in Kingston in May as two of her favourite performances thus far.

Koffee, 19, a late edition to the Sumfest roster, performed on a predominantly dancehall stage and delivered. The Toast singer worked the stage for 15 minutes, delivering songs such as Burning, Raggamuffin, Reggae Beat
Rapture and Toast.

Following her performance, the Spanish Town-born artiste admitted that her near meteoric rise was never something she predicted.

"To be honest no, it caught me by surprise," said Koffee who first came to public attention in 2017. Then she did a tribute to the world greatest sprinter, Usain Bolt, who posted it to his Instagram page. The next January she wasbrought on the Rebel Salute by Coco Tea, and since then her career has taken on wings.

On Saturday morning she worked the Reggae Sunmfest stage effortlessly, skanking from side to side in her shorts suit.

"Thank you for having me. It is a pleasure to be here, my very first time.... It is a special moment for myself and my family," the teenager said.

After her performance Koffee said she enjoyed the moment. And when asked about her mode of dress, which often appears masculine, the artiste suggested that she had no intention to change her style.

"I have been myself all my life so I am not gonna feel threatened to change now. There is good and there is bad, people are able to appreciate and not appreciate things that you do at the same time so I just focus on the positive and keep moving forward," she said.