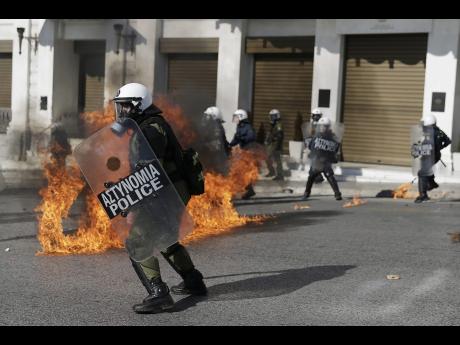 File Riot policemen try to avoid petrol bombs thrown by protesters during a rally in Athens, Greece, on Thursday.

Wow people, what a week! What a world! Who are you currently fighting with? Whether it's via a cyber clash, an online offensive, a text message 'trace off' or an old fashioned fist to fist fight, it looks like everybody everywhere is busily fighting everybody else about something, anything, everything or nothing. And nuhbody nah win. Everybody is losing. Every corner you turn now, all people hearing about is bombings and shootings, and air strikes and ground troops. Yes mi dupes!

Government forces versus rebel armies versus militant extremists versus moderates and their allies. It's also Muslims versus Christians, Shias versus Sunnis, and so and so forth. And everybody and his cantankerous cousin is on the various social media platforms every day, fighting furiously with everybody else about who to mourn or who to condemn or who deserve big up versus who fi get 'bun out'.

Don't know about you, but I've had enough already. Dis yah world yah too mad yah, mi waan jump off. But mi fraid mi drop. Sometimes I just honestly feel to cork mi ears and close mi eyes and scream with the hope that the noise will wake me and I find that it's all a dream. Mi nah lie, my head is in a spin. I'm struggling hard trying to make sense of the whole thing. And I'm failing spectacularly. I seriously feel like I'm in the middle of World War Three. How about you? Agree or disagree? Yuh better agree, because if you disagree, it just means one more war start - yeah, you versus me!

And over in Jamaica the capital of confusion and contradiction, it will soon be another full blown orange versus green confrontation because the absurd tragi-comedy is getting ready to begin. Yeah, some call it election, but it can also either be a war or a party, depending on your position. And as soon as Mama P gets that special touch from her master, she will blow the trumpet and the two sides will circle their wagons and start the bangarang!

Thankfully, there is usually a brighter day, hopefully waiting to follow even the darkest night. Yes peeps, in the midst of all the deadly disasters, dark duel and dull debates, there is usually that one story that cuts through the heavy grey clouds like a sharp stroke of light. Like that story I read a few days ago about Jabary Williams - a 19 year old young man from inner city Kingston who found $100,000, and even though he is poor and in need, he did the right thing and returned the money to the rightful owner.

In these desperate times when the 'eat a food' mentality is so rife and everybody seem to be focused selfishly on their own material interests, Jabary's act of moral courage is a delightful departure from the typical negative narrative. That youth deserves a barrage of big ups! What say you?

Me? I think he's a shining reminder that if we look good, we will invariably see much more than the biter buck and bite or the fierce fuss and fight. Of course, some people in his community initially heaped condemnation on the youth because he did not do the dishonest and selfish thing and keep the money for himself. But even those folks are now realising the error of their attitude. Yeah as Bob Marley said 'everywhere is war', but thanks to Jabary we can hold on to the hope and assurance that even if it's not 'every little thing', some things still right. And yeah, ah dat me a focus pon yah star, mi nah pree the war!