Christmas a come and the traffic is horrible 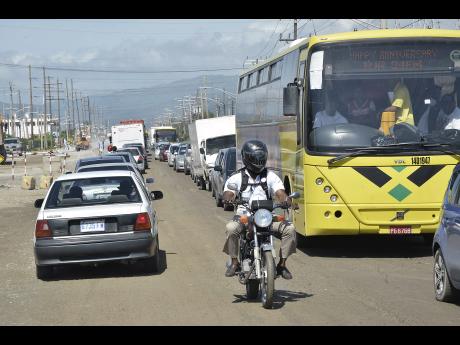 Motorists travelling along Marcus Garvey Drive in Kingston have been forced to spend hours in traffic due to construction now taking place on the road.

Mi know nuff people just dying fi 2016 done, so all the crasses weh come wid it can gwaan as well! Mi always hear people talk bout the bad luck, crosses, devastation and judgement weh leap year bring, and in many respects 2016 live up to it! Still haffi gwaan give thanks and keep positive, and just hope seh 2017 will be even more prosperous and progressive.

This brings me to the main point of this article - the traffic jams all over the country, especially in the major towns and cities. There have been many complaints about traffic jams this past weekend in Kingston. People wondering if there were accidents, if roads had been closed due to damage from the recent rains or if the police had diverted traffic for whatever reason.

What really causes these traffic jams? From my observation and understanding there are several reasons, but I mention just a few.

1. Poor planning by the authorities over the years. In many places, traffic has gradually gotten worse, especially during peak hours in the mornings, afternoons and evenings, as the authorities have not devised or implemented plans to alleviate or prevent this problem. Such plans could have included widening roads to create new driving lanes, and erecting traffic lights in some areas where people bore at four-way stops.

2. Potholes - These are one of the biggest reasons for traffic jams, as people slow down to prevent damage to their vehicles. Mi naw lie! Nuff time mi see di pothole dem and mi feel seh dat ah people dig dem fi spite as dem shape too perfect! Some look lakka dutch pot! Some a dem come in like crater, and if yuh no careful, yuh car will drop inna dem and lost!

3. Too Many Vehicles - Jamaicans are ambitious people, and want to achieve and look good. Consequently, owning a car is a huge status symbol, and this has resulted in many Jamaicans owning vehicles. Plus, yuh know we boasy lakka bed chink and want the world fi know seh we have we vehicle and vehicles dem! So many persons tend to drive his or her vehicle instead of carpooling, which has been proven to be an effective way of reducing the number of vehicles on the streets.

Nuh matter di reasons, we have to find ways fi fix di roads and implement solutions that will help to alleviate the problem ... cause it big!

Ah nuff people we hear bout who build up road rage because ah de traffic jam situation. Dis can lead to confrontation and result in loss of life and damage to limb and property. Sometime the rage build inna yuh, yuh just haffi 'woosah', and listen some gospel music and sing along!

The way the traffic bad, mi feel like mi woulda buy a BMX bicycle and ride go where I'm going! Maybe mi can all 'tow' somebody and collect a money! Lol!! We must rectify this situation quickly.

Mi ah beg unuh, have some consideration fi each other as dis way wi can avoid di badderation! Tek time pon di road dem until next time when me talk di tingz!!