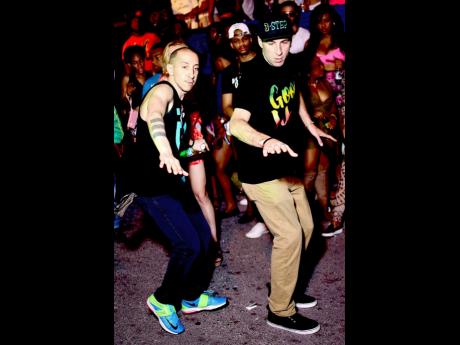 Two members of the Watch Mi Step crew from Germany dance up a storm inside Yeng Yeng Fridayz.

Houses of Parliament tun up loud and I felt humbled and honoured that she recognised my work and worth with such flattering sentiments.

Mi really appreciate her fi di acknowledge, because more time it seem like women always a look to tear down each other, so mi glad fi the positive empowerment which I will endeavour to pass on to other women.

Outside a my big-up though, the bigger and more important picture that the senator was painting regarded dancehall as a vibrant and viable industry if packaged, marketed and promoted in a positive way.

She hit all the right notes when she mentioned that dancehall feed nuff people, from 'soupie' to promoter, artiste, cameraman, jerked chicken man to sound system operator.

It is the medium through which many persons have extricated themselves out of poverty, send their children to school and make a life for themselves.

It is a billion-dollar industry from which many benefit but, unfortunately, much of the beneficiaries are not in Jamaica and nuff a dem a not even Jamaicans!

Mi no blame nobody fi come and sample we culture, because that is a way to spread it so it gets wider acclaim.

My problem is that many persons are not proud of our dancehall culture and so dem skin up dem nose an gwaan like dem betta than it.

An as mi granny woulda seh, "weh tan too long serve nedda master". Nuff people associate dancehall with dunce, lewd and vulgar and wash their hands of it, yet a dat di farina dem like!

Dem fascinated with the way we dress, the slangs we use, our dance moves and everything about our culture that many people shun and look down on.

The funny ting is, nuff a who a look down on it and a gwaan like dem born inna palace never grow wid no cloth napkin and helper and a dancehall send nuff people go a school.

Many of the countries and cultures that are winning are the ones who embrace their culture and believe in it. So it was great to hear Morrison, a woman of high esteem, influence and power, a talk up for the product.

There are many tourists who come to Jamaica not for the sun, sea and sand, but the special vibration and the authentic Jamaican culture we have. Some place inna di worl have all pink sand, so anno just the beach dem a bring the visitors dem!

It would be remiss of me not to say that the genre is riddled with problems that need to be urgently sorted out by the stakeholders. Certain dutty gun and murder music not going anywhere!

But instead of berating our music, let us look at and employ those facets that have served us well and discard those that continue to shackle us.