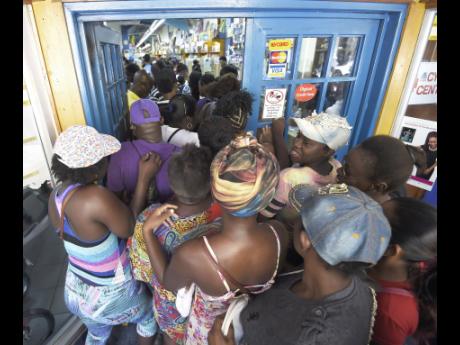 Shoppers rush through the doors of Kingston Bookshop, located at 70B King Street in downtown Kingston in late August, as persons were busy making final preparations for the new school term.

The school term start and is now in full swing. I want to salute those parents, guardians, family members and friends who gave support to the whole back-to-school preparations because it can be rough and expensive. From the books to the uniform to the school fees to the snacks, and everything in between. It takes a lot to adequately prepare a child for the new school year, and get everything in place. But unuh know mi haffi talk up bout di deadbeat mumma and puppa dem wah never pitch in wid not even a red cent!

Some man and woman still a skid and ramp wid dem pickney future! From di man dem who a buy liquor and a floss inna dance to di gal dem who a buy bundles of hair and expensive claat and boot, yet nothing is in place for their children. Gal go a hairdresser and use the baby back-to-school book money wah di child fadda send from foreign and a do hair. Then have the nerve to exclaim seh she will go hustle it back. Whether she a run an amusement park where she's giving free rides is her business. However, I would think that any well-thinking parent would put the needs of the child first. Hair and nails can do at anytime, but education cyaa stall. They are the same ones, when their children are not performing well in school, want to cow down di pickney and the teacher and nuh memba seh dem never provide the proper tools for the child to excel.

Mi see a woman a class and cuss her babyfadda for not providing the snacks needed for their child. Mi did feel a way because to how di woman a talk from her toe point, yuh can know seh her cup full. What kind of man would be so selfish that the woman seh she provide everything else, and all him fi do a buy snacks and not even that him nuh do.

It is important, however, to note that there is a huge difference between a mother and a carrier, and a father and a donor. If yuh enjoy what it took to bring the child in the world, then please remember that they are your responsibility. Some man believe if dem and di woman not intimately involved anymore, then dem nuh take care of the child, while some woman use the child against the man because dem cyaa have the man. What a prekeh di poor pickney dem caught up inna!

It is very important that we take stock of the persons we lie down wid, because one night of passion can lead to a lifetime of misery and problems. If yuh hear seh the man have nuff pickney or even hear seh him is a man who nuh mine him pickney or pickney dem, don't see the fire and jump inna it and then bawl afta. Men, if yuh hear seh a woman careless, nuh have no ambition and nuh tek care a her pickney dem, don't go and impregnate her and expect her to be the mother of the century. Always remember, a cow cannot bark!

It breaks my heart that innocent children have to go through this tug of war all the time because of irresponsible parents who will be the same one to present themselves at graduation and claim their parental association. Nuff a dem don't have no shame or conscience fi know seh dem never contribute to the child's growth and development, so dem fi gweh! How yuh child fi come to yuh fi lunch money and yuh tell dem yuh nuh have it so dem fi go look it?! A so some a dem open dem children to all kind a demon and a life of crime.

Children must do their part to make themselves, their parents, communities and Jamaica proud. If your parents go hard for you, please go hard for them and honour the sacrifices they have made. Big up all the teachers and educators, because the contribution you make is priceless. Education is a partnership between parents, teachers and children. It is of paramount importance that each play their role well. Buckle-down time now and I wish everyone a successful school year. Dunce neva get pick. A education mi seh! Lalalalalalalalalalalalalala.