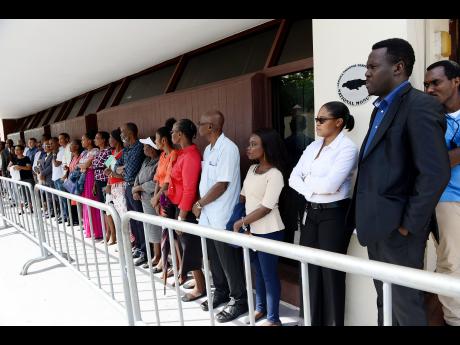 Concerned Jamaican citizens took up position outside Gordon House recently. They had issues with the National Identification System, which the senators had been debating on the inside.

Last week, a number of things highlighted the news in Jamaica, the chief of which, in my humble view, was the National Identification System Bill (NIDS).

Essentially, the Government of Jamaica (GOJ) is proposing a system whereby each person has a special identification number which has to be used for transactions and other things.

Two ideas behind this piece of legislation is that it would help to reduce crime and violence and improve tax collection.

NIDS sound good pon de face of it, but ah nuff people and organisations have concerns including the Jamaican Bar Association and Jamaicans For Justice.

Di main worry seems to be that there is a requirement for mandatory enrolment. Failure to do this can attract serious punishment including the denial of access to vital services including medical treatment and heavy fines.

People seh dat big countries abroad like England and the US nuh have dis den why Jamaica haffi tek it on?

Plus people worry dat dem information aggo fall inna di wrong hands and can be abused once the digital/electronic system is compromised.

Computer hacking and corruption are very prevalent and such detailed and personal information may not belong in a database where smaddy can tamper wid it.

It is also being said that Jamaica needs serious financial support and this will not come if the legislation is not passed. This has prompted talk that we are selling out ourselves - again!

The GOJ and supporters of the proposed law have said that law abiding people have nothing to hide. That might be true but what happen to peoples constitutional right to privacy?

Supporters also say this will improve Jamaica's image and bring our economy into the digital age with chances to accomplish the '5 in 4' growth target.

The Bill was passed by the House of Representatives with more than 100 amendments and by the Senate with 168 changes. It is not yet law, as it has to return to the House and then, subject to what happens there, will have to be signed into law by the governor general and then gazetted.