Racism is deeper than a 'monkey' hoodie 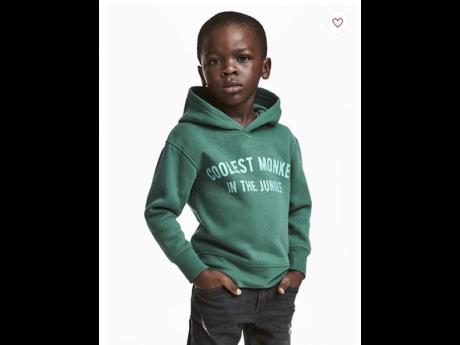 An undated photo of an advert for a hoodie by H & M. The brand removed the image, but kept in place other designs modeled by white children.

Our eyes have been dazzled with so many material possessions, worldly achievements and money that some have sold their bodies and souls for them. These acquisitions have been advertised to lure and lower the consciousness of the black man and woman. To normalise it in such a way that the pain, hurt and struggle from which we emerged is a distant memory. One so painful that many do not wish to speak about, acknowledge or associate with it. The divisive tool that the plantocracy used to divide slaves both from their families, and into house versus field slaves afflicts our race even now. One would think that with

all the knowledge and technology, black people would be so aware and in tune with any ploy or plan, direct or indirect, to keep us subservient and feel like we are still just 'black monkeys'.

The recent ad campaign by a clothing company that saw a little black boy clad in a green hoodie which read "coolest monkey in the jungle", while a little white boy was in a similar orange hoodie which read "survival expert", has drawn the ire of many people across the world.

Why di black pickney shirt haffi have a reference to monkey, which is a pejorative term used to describe and label black people from the days of slavery, while di white pickney own say him a expert survivor?! With the overwhelming backlash the campaign received, they have since pulled the ad and issued an apology.

If we tek a deeper look though, dem neva see seh dat inappropriate? An ad campaign like that in the United Kingdom, that has a long history of white privilege and black denigration, would be offensive to anyone who is aware of subliminal messages and conditioning the mind. It is important not to just read things at face value but sometimes we haffi look behind the veil because a whole heap a cobweb roun' deh!

The issue has also brought to the fore that some people, even black people, think that the ad by the clothing company, H&M, is much ado about nothing and so they do not see it as racist. As a matter of fact, the child's mother has come out to say that people are making a big deal over nothing, it's her child and she sees nothing wrong with her child wearing a hoodie that says "coolest monkey in the jungle".

All along, people a ask weh di mother did deh. Well, mi love, she come right out. Other companies like American Eagle, Dove and even Ellen DeGeneres, who made a pic of her (a white lady) on the back of Usain Bolt (a black man), drew the anger of many. How do we know when it is racism? Is everything about race? Do black people perpetuate racism but support brands and people who are known to be racist? What is our responsibility as black people to minimise incidents of racism?

Even though the mother came out and a support the ad, it may be argued that because she get a big money her mouth cut cross way, so she can chat anything.

However, this goes deeper than her son and his hoodie. We can't mek because a money we mek people tek we fi monkey! Nutten no cute 'bout dat! We haffi read and get knowledgeable, so that we don't end up back in shackles and coffles while we try to continue removing the mental shackles that have been put on our people. We haffi open we eyes and look, cock we ears so we can hear because if we turn a blind eye, history can repeat itself. Everything is not about racism and racism does not exist in every situation or circumstance, and not every one is racist, but let us be clear, racism exists! We haffi love ourselves as a resilient and tenacious people. Know thyself, and to thine own self be true.