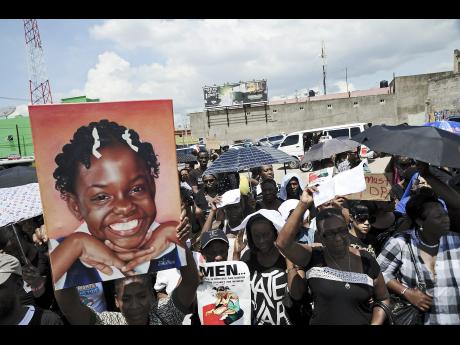 A protester holds up a poster of Ananda Dean, an 11-year-old girl, who was sexually abused and slain in 2008, during a Black Friday march in 2012.

Last week, I was distressed to hear of a video involving a little girl under 10 years old allegedly performing oral sex on an adult male. Di ting hurt mi heart so til. To how mi blood start bwile, mi couldn't manage it, so mi never even look pan di video that was making di rounds.

It was later reported that the video was from Trinidad & Tobago from about two years ago. Reports indicate that the authorities were seeking the perpetrator and also that he might have been caught.

How could someone do that to a little child, who reportedly still had in bubbles and clips in her hair? Wah kinda 'Beelzebub' coulda mek somebody do dat to a sweet, likkle pickney? No sah! Mi uterus!! What kind of justice must be meted out to all him?

The police were quick to remind the public that circulating or sharing such videos involving children are criminal offences, in breach of the Child Pornography Prevention Act and the Cybercrimes Act. People must realise that when they circulate these videos, they do more harm than good. In fact, doing so is a crime and people can be prosecuted for doing so. Additionally, this is bad for the child/victim and exacerbates the trauma, etc. It hard, because some people actually share these videos with good intention, to get out the information so hopefully somebody can recognise the child and trace it to the perpetrator. But that is a two-edge sword, because a the baby it a go scar for life.

Di old wicked dem, who are predators seeking to spoil our children and mar their future, are usually either family members or close friends. It's normally people weh close, and you and your children trust dem. A di serpent dem, under disguise as angels, who often perpetrate di nastiness and wickedness on our innocent ones.

Parents and guardians have to be particularly vigilant and not leave their children exposed to any and anyone. Talk with your children about good touch and bad touch. Create a relationship with your children, where they feel safe to tell you everything. There are some children who will lie and be mischievous, but it is better to err on the side of caution by investigating the complaint than ignoring it. Children are depending on adults to protect them and not to abuse and destroy them.

Mi naw lie, mi iggy fi johncrow deh inna di video and all a di old Lucifer dem who molest wi children and spoil their innocence. Mi hope him get weh him fi get. Cause like how him damage the baby for the rest of her life, mi hope anything wah him get a go mash him up fi di rest a fi him life! Ole scurmage! Many of these victims will never be the same, being scarred for life. Please let us protect and preserve our children, After all, they are the future.