Justice Sykes get him 'buss' 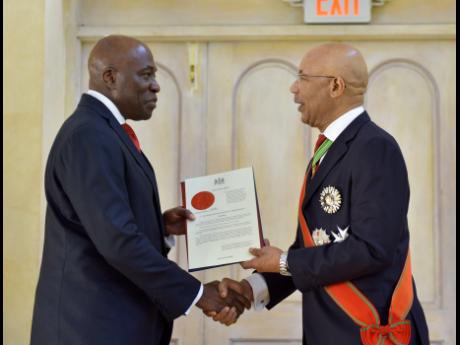 Like many well-thinking Jamaicans, I am relieved that Jamaica's Prime Minister, the Most Hon Andrew Holness, finally appointed Justice Bryan Sykes as Jamaica's eighth chief justice (CJ). My readers might recall that on February 1, 2018, the PM appointed Justice Sykes to act as the CJ. Who nuh know a because unuh did a live under one rock!

This was on the heels of the retirement of CJ Zaila McCalla on January 31, 2018, when she turned 70 years old. Our Constitution, the highest law in the land, mandates that the CJ has to retire on reaching this age. There was, therefore, a clear vacancy for CJ, and people thought it would have been filled. Nonetheless, the PM appointed Justice Sykes to 'act', and, while doing so, put him pan 'probation', essentially saying mi a go watch weh yuh a go do and how yuh a go perform before mi confirm you permanently! Woeeeiii, mi pancreas. A who tell bredda Andrew fi go seh dat! Pure bangarang come dung pan him!

The whole issue served as a reminder of the hallowed 'separation of powers' principle by which we are supposed to be governed. The executive (Cabinet, led by the PM), the legislature (Parliament) and the judiciary are three separate arms of government and there should not be any intrusion by any with the others. It was felt that by appointing Justice Sykes to act, the PM was trespassing on the independence of the judiciary. Anyway, dat gone now, and wi hope seh di lessons were well learnt and Jamaicans are now more educated about this important constitutional issue.

Although it was understandable, mi vex how seh dat everybody just did ah focus pan the acting appointment issue and nah give Goodas Zaila har props!

Regardless, it cannot be denied that after creating history and becoming Jamaica's first female CJ more than 10 ten years ago, she performed with unstinting commitment and acquitted herself admirably. Big up yuhself, Zaila. Jamaica better off because a yuh! You deserve some well-deserved fun, rest and relaxation. One a dem day yah mi hope seh we can buck up inna Bora Bora or Dubai and just chillax!

As for CJ Sykes, I wish for you, sir, all the best in your new post. You have the daunting task of repairing a badly battered court system and restoring people's faith in the justice system. By all accounts, you were a great choice for the post, and we are confident you will get the job done and leave a lasting legacy!