Another wonderful year at Champs 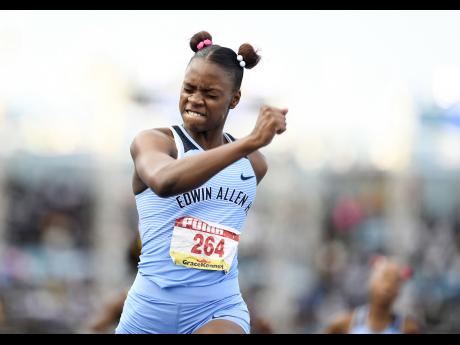 Kevona Davis of Edwin Allen celebrates after winning the Class Two girls 200m finals with a record time of 22.72 at Champs 2018.

Mi know seh some people have it fi seh dat the KC man dem gwaan too much and dem hype. There may be some merit to that, and it may not necessarily have to do with the school, but, rather, the individual. Talk di truth, though, everybody hype inna dem own way. There are schools that cannot boast the rich history, tradition and legacy of a Kingston College, and yet dem boasy like a bed chink.

One characteristic I have observed among Fortis men is that of unity and togetherness. Their ability to help and look out for each other is quite admirable. Mi nuh say other schools nuh stay so, but the KC spirit embodies this way of life. Truth be told, if Jamaicans should adopt that caring togetherness and be our brothers' and sisters' keeper, we woulda better off. Instead of fighting against each other and exhibiting the crab in a barrel mentality, we can learn a thing or two from the Fortis dem.

Let me hasten to congratulate Calabar on their seventh victory at Champs. Christopher Taylor was scintillating to watch, and him a real star bwoy! Big up KC, who placed second, and Jamaica College, who was third.

For the outstanding ladies of Edwin Allen High School, I salute you! Big up Holmwood, St Jago, St Elizabeth Technical (STETHS) and the ladies who seem fi can run faster than the vehicles out a Ferry, unuh gwaan excellent Hydel. I was so impressed with the tenacity and resilience that the young ladies demonstrated, though under immense pressure. When I looked at the crop of athletes present in the stadium, I know it is possible for more international superstars to be made. The raw material of talent, drive and passion are already present, therefore it just needs to be honed and guided.

I hope that both government and non-governmental organisations will increase their support for these athletes so that these young talents can actualise their full potential. Mi happy fi di pickney dem so til, mi feel like mi glad bag buss. Mi hope the authorities nuh badda wait long or wait till when smaddy a farrin scrape dem up, then we a go want own dem. Let us be proactive and not reactive.

To all the teachers, coaches and officials at stadium, thanks for yet another wonderful year at Champs. Win, lose or draw, a KC to mi ting! Nuff people who a seh Calabar a just waggonist dem. Ask dem the Calabar motto, dem nuh know it; ask dem school address, dem nuh know it. Mi nuh believe inna jumping ship when the chips are down. Nuff a jump and beat dem chest and if dem start lose next year, dem jump ship. Like how nuff a dem seh dem a Rasta and a nyam pork gravy! Wwwooiie, mi '26-year-old' body!!

Mi hope unuh have a wonderful and safe week. Be strong and be steadfast in what yuh believe in! Be careful and tek care. And to mi other Fortis supporters, dem still haffi play catch up because a 15 years straight we give dem. So all who a enjoy di winnings, continue; but always remember the brave may fall but never yield. Selah! One and ready, two and move!!!