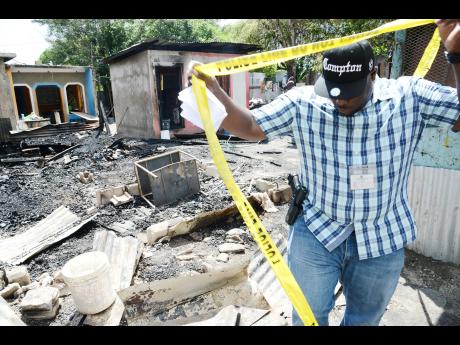 Nuff people a seh dem no too watch news again because it too depressing.

Mi nice, clean, decent readers, how unnu do?! Mi hope everybody doing well an tek time a cut and go through in Jesus' name! Sometimes tings get a way and the way might seem dark and slippery, but a mi know seh once Fadda God inna di vessel, Him can get us through the storm.

The rigours of life can definitely take a toll on the quality of life because if yuh no careful, all the Devil want yuh fi see is doom and gloom. If yuh follow all that is going on around you - woman problem, man problem, pickney problem, work stress - it sticky outta road! Not to mention, just by watching the news, more while yuh feel like you woulda just tek a trip outta space and call it a day!

Mi hear nuff people a seh dem no too watch news again because it too depressing, and after dem done watch it, dem feel fraid. Sometimes yuh watch some tings pon TV and to how yuh 'fraid, yuh all a peep through yuh owna window a night time and the incident no happen near yuh! It rough, but we naa give up.

Keep believing in yourself even when others count you out. The race is not for the swift, but who can endure til the end. Many times we expect people to celebrate us and acknowledge us, yet we don't acknowledge ourselves. Big up yuhself and love yourself, no matter weh nobody want seh! Yuh have some people inna life, no matter what you do or say, they will always find a negative angle to highlight and you will never be right for them. That is OK because as long as Fadda God a hear me and is with me, a that's all mi care bout! Yuh have to believe in yourself and your abilities. Some tek it early, while some tek it late. The important thing is to keep moving toward your goal and focus pon it so til it a deaf yuh, so when the haters dem a talk, yuh can't even hear dem!

Nuff a who a find fault wid yuh and try bring yuh down with dem sepulchre mouth not doing better than you in no way at all. People who really a strive inna life no have time fi siddung pon people name every day with only bad things to say. That is why it is important that you surround yourself with positive people who a focus on progress, love and elevation. Nuff time dem a chat yuh, a because dem envious and wish they were in your position. Nuff a dem no have no peace of mind. Dem no have clean heart and dem not even wish good for themself! Nuff a dem hate dem owna self, so how yuh expect dem fi happy fi you? Misery loves company. That's why me stay far from it, and so should you!