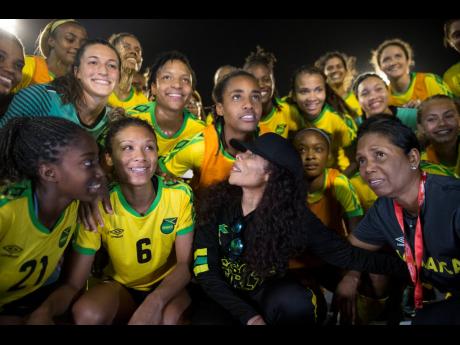 Cedella Marley (centre) hangs out with the Reggae Girlz after their match against Panama at the National Stadium earlier this month.

There is always love inna mi heart fi di nice, clean-hearted people dem who want fi see other people strive and excel – the one dem who genuinely happy for others and who help to build up and not tear down. If you a one a dem, may God shine His grace upon you so you and yuh bloodline will flourish and do great things! We a go give we enemy dem pure problem and heartache. Who God bless, no man curse!

There is a resilience and tenacity that a Jamaican woman possesses that when we mek up we mind fi tek it to dem and tek it to di world, we are unstoppable. Our indomitable spirit mek we move any mountain or obstacle inna di way and overcome some tings that other women in the world probably couldn’t manage. Sometimes when I think about some of the many stories of trials and tribulations of the Jamaican woman and yet how we rise like the phoenix, mi think a time we have another female heroine.

When I look at the insurmountable odds that the Reggae Girlz overcame as the first national football team from the Caribbean to qualify for the Women’s World Cup, mi heart full. At the same time, it is heartbreaking fi know seh the females go so hard and do so much, yet the overwhelming support weh di man dem get, the women don’t get it. From fans to corporate sponsorship ‘mawga’ bad!

This feat is bigger than football. It goes to the very heart of equality and fairness. Everyone wants to bask in the glory, but very few want to endure the gruelling journey. Mi haffi lift mi hats off to Cedella Marley, daughter of music icon Bob Marley, for spearheading and piloting the dreams of the Reggae Girlz to fruition. When nobody else was there or believed, she tek up matters inna her own hands and put her money weh her mouth deh! When mi witness the love, pride and camaraderie between she, the staff and the Reggae Girlz, mi feel so good. What makes it even more special is the fact that she never haffi do it because she nah look no hype. A ‘Marley’ she name, so she not seeking no additional spotlight. But based pon the information gathered, a she start di fire and mek di whole team catch a fire.

As the Reggae Girlz embark on this momentous journey, mi a ask all Jamaicans – those home and abroad – fi roll out the support in a big way. Especially the females dem because dem have it fi seh woman nuh support a next woman and woman tear down a next woman the most. Mi hope if a even fi di World Cup inna France, we can come together and change the narrative so that we can show our ‘never say die’ attitude to di world. Mi want fi see di support pon all media platforms, mi want TV set up a roadside, mi want the sports bar dem fi have deals and specials, mi want hear pot cover in di streets, so that the Girlz can feel the love, power and support when dem deh a France!

Big up the Reggae Girlz and all coaching and administrative staff. Bless up Cedella Marley and her vision. Mek we do our part as a nation to embolden their efforts! Viva las Reggae Girlz! Lalalalalalalalalalalalala! Tek care till next week. One love!