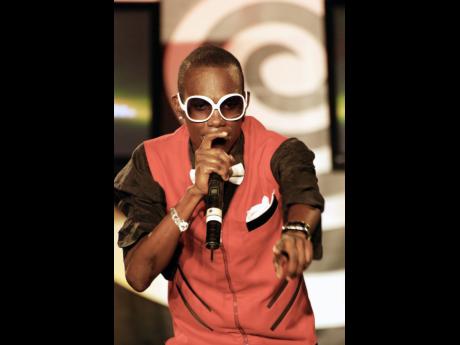 The streets are talking about the return of Tanto Blacks to the dancehall scene.

Armed with a pair of hot, new singles, Real Rich and I'm Back, plus the support of popular independent music label Push a Yute Productions, Tanto is ready to take his place in the dancehall spotlight.

"Rich!! Tanamaneh! Tanamanah!! I'm back, and mi a go lock down Sting and remind the people of the power of Tanto Blacks," Tanto Blacks said.

He is one of the most anticipated acts on this year's Sting concert in Jamworld, Portmore.

With slangs such as 'twitter!' and 'bluetooth!' and songs such as Ticklish Me Baby, Blacks is known for his street humour and his weird fashion sense with his numerous rings, chains, and unusual glasses.

The streets have responded to I'm Back, which is one of the singles on the Rebound rhythm project circulating, the streets.

Rebound is one of Push A Yute's latest production projects circulating with the buzz of the artiste. Tanto Blacks has been working closely with the team for the past 12 months and is now managed by Tandra Jhagroo, producer-engineer and part of Team Push A Yute.

The compilation album consists of tracks from Ward 21 (Want Mi), TOK (That Body), Clueless Brothers (Gal Me Want U), and Gage Almighty (When It Rise).

"Mi say rich before mi go Benz and mi go Volvo. Mi can have $500 in the dance, mi rich. If mi have $100, mi still rich. Even mi son inna di belly who a come name 'real, real rich. This is only the beginning. Tanto has lots more in store. 'the Range is on the way," he said.