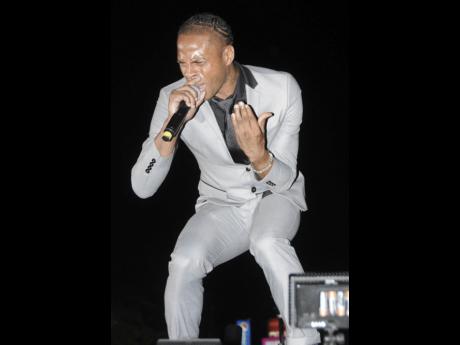 Dancehall artiste Dexta Daps has been left speechless after witnessing a couple performing oral sex in the audience during his set at a recent show in Oakland, California.

A video of the incident, which has been making the rounds on social media since yesterday, shows the male patron hoisting the female patron in the air, burying his face between her thighs while Daps is on stage. The couple quickly became the centre of attraction, stealing Dap's spotlight as the other patrons turned to watch them uninterested in the entertainer's performance.

Daps told The STAR that it was his first time experiencing anything like that, and described the incident as weird. "They were engaging in a weird activity. The show stop, everybody was looking at them," he said explaining that he continued the show even after noticing what they were doing out of professionalism. "It is a stage show and the performance had to go on."

He went on to explain that although he did not stop the show, he did cut his set short because he disapproved of the couple's impromptu sex show. "I was planning to go longer with my performance, but after I saw that I just decided to lift up," he said.

The entertainer wants to make it clear that he is not lashing out at, anybody and their sexual preferences, but believes the couple took things too far. "It was a stage show, not a tongue show, that was the wrong place and the wrong time. Don't get me wrong innu, I would bun it out same way if it was a man and a woman having normal sex because that was just not the place for it," he said.

The entertainer said while he cannot plan for situations like that, he acted in the best way he knew how to at the time. "It's a sensitive topic (oral sex), and I didn't think that was the time or place to directly address it by talking about it. The more you say about things like that, the more fuel you give it," he said.