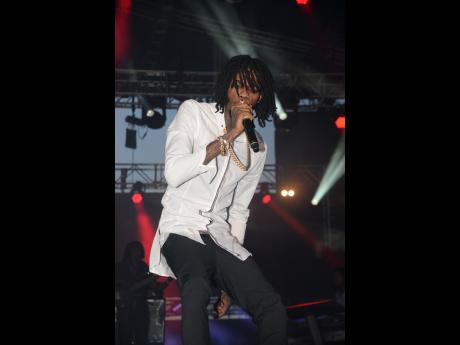 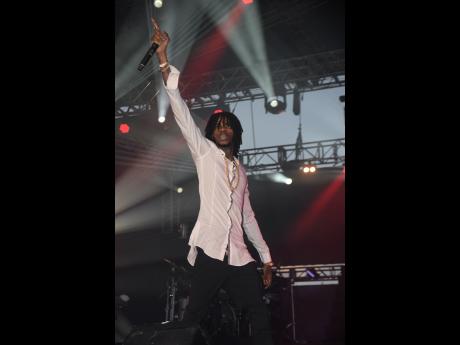 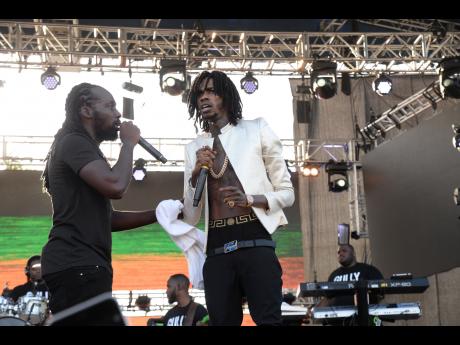 Jermaine Barnaby/Photographer Mavado (left), who was the second to last man to perform on Dancehall night, brought Alkaline on stage to help excite the crowd at Reggae Sumfest 2017.
1
2
3

Vendetta boss Alkaline was one of the strongest performers during Dancehall Night at Reggae Sumfest 2017 on Friday night.

Taking up the mantle after the gauntlet was masterfully laid down by the likes of Spice, Dexta Daps and Bounty Killer, the lanky Alkaline, who entered centre-stage at 5:57 a.m., took charge right off the bat, belting out a string of hardcore lyrics, to include, Nuh Like People, Too Real and Another Level.

Performing to a receptive audience at Catherine Hall, Alkaline wasted no time in ‘dissing’ Tommy Lee Sparta, referring to him as ‘nyammie Lee.

With the situation ripe for the taking, Alkaline went into overdrive. He all but brought the house down as screams fill the night as he unleashed, A Mi Fi Tell You, Anytime and Nuh Gimme No Talk. After slowing down momentarily to dedicate a song to mothers, including his own mom, he again up the tempo, heaping more ‘diss’ on Tommy Lee and fellow singjay Popcaan.

When Tommy Lee Sparta took the stage as the closing act at 7:12 a.m., he went to work immediately, belting out a string of ‘diss’ songs aimed at Alkaline. He also made it clear that Alkaline was a not up to his standard either lyrically or in terms of ‘pure badness.’

Meanwhile, had it not been for the ‘dissing showdown’ between Alkaline and Tommy Lee Sparta, which generated the most excitement, like last year, Friday night’s unofficial ‘artiste of night’ title might well have fallen into the lap of Spice.

The artiste delivered a masterfully choreographed set, which saw her being wheeled on stage lying on a bed, clad in an elegant robe with a microphone in one hand and a bottle of Sperone wine in the other.

Outside of the glamour outfits, which were revealed when the robes were removed, patrons got much to go wild about as the classy dance moves and Spice’s risqué interaction with a male Japanese patron, who she invited on stage, blended perfectly with her lyrical brilliance. 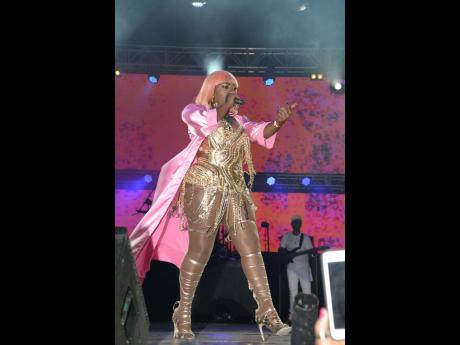 While not as potent as Spice, Dexta Daps also performed a set rich in excitement, energy and charisma. In fact, he left very little doubt that, with songs like, Seven/Eleven, Wine Fe Mi and the mega hit, Bring it to the Owner, he is now a bona fide top-flight act.

Bounty Killer, Movado and Aidonia collectively left no doubt that deejay and singjay music remains potent pillars in Jamaica’s music. In the case of Bounty Killer and Movado, it was always like a trip down memory lane as they picked out the ‘gems’ from their respective catalogues and skillfully serenade the fans.

In regards to Aidonia, it was a case of him once again proving to the fans that he deserves his place among the big guns in dancehall.

Among the other acts, young Shensea demonstrated that she is on a mission to become a household name in dancehall. Her delivery of songs like, Double Six and Jiggle Jiggle alongside her sexy persona, clearly gave the impression that she is on her way to stardom.

Tifa, who probably performed far too early based on her status as an established act, was another of the female performers, who produced the goods. In fact, she reminded all and sundry that when it comes to ‘matie songs,’ she is the boss.

K Queens, from the Bounty Killer camp also did well enough with their hardcore lyrics to suggest longevity in the business. Among the other male performers, much could be said for the likes of Devin Di Dakta, the lyrically smooth Singer Jay, the exciting Nigerian artistes Pata Ranking, promising young Jahmiel and the dancing masters, Ding Dong & The Ravers Clavers.

However, sadly for them, they performed at times when patrons were still coming into the venue.