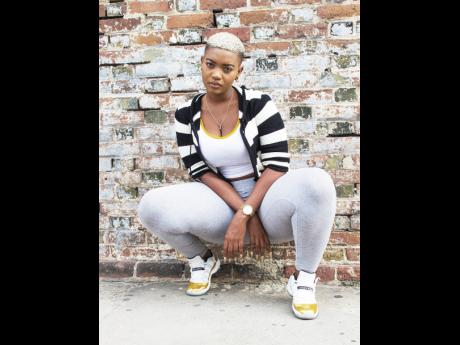 Fast-rising artiste Jada Kingdom has pledged her support for the 'Nuh Dutty Up Jamaica' campaign.

The singer was invited to be a part of a clean-up assignment at St George's College last Friday, where she helped to encourage students to keep their environment clean. Each class at the institution was assigned the task of picking up as much garbage as possible at the school, with the winning class receiving $5,000.

"My job was to motivate the pupils, and judging by the burgeoning garbage bags at the end of the competition, it seemed to work. As young people, we must do everything we can to preserve our environment, so I was glad to be a part of this worthy cause," said an excited Kingdom.

"George's Key Club contacted my manager and said the students were massive fans of mine, and they thought my appearance on the campus would help inspire them to pick up as much garbage as possible."

Kingdom, who highlighted that she has always been in support of any initiative that promotes a clean, healthy environment, said it is important for entertainers to use their massive appeal to raise support for such initiatives. She especially called on young entertainers to remember how important it is for them to set an example from early out in their careers.

Since the release of her debut single and video, Love Situations, Jada Kingdom has been attracting a huge amount of attention. The fresh approach to her craft, coupled with her image, has led to 320,000 followers on Instagram and nearly 400,000 views for the Love Situations video on YouTube.

Happy with the response to her debut single, Kingdom has been in studio putting the finishing touches to her EP, Wull On.

She said that as an aspiring female artiste, she has been faced with many trials and tribulations, but promises that she will continue to push through as she wants to be remembered for making great music and for charting her own course.

"The response I get from people from all walks of life every day has been inspirational. I just want to continue to try and make great music, build my following and make my own path in the business," she said. "I've had nothing but love from other artistes, too, so I'm amped to release more music soon."