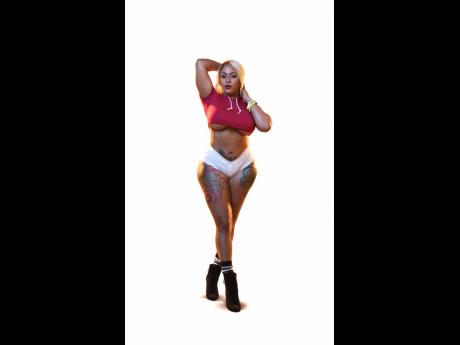 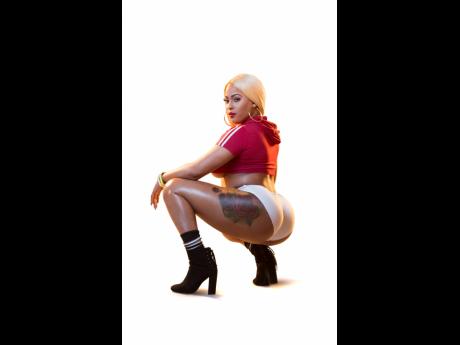 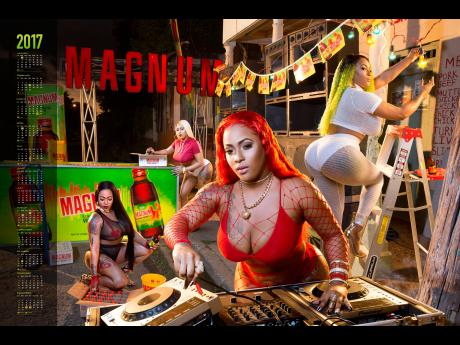 DHQ Sher is showing off her new body on the 2018 Magnum Tonic Wine calendar. The dancer, who also now goes by the name Luxury Doll, said posing for the calendar is an important career step.

"We all know that Magnum rules the dancehall, so when I got the call that I was chosen for the calendar, I was really excited. A move such as this can only do good for me. It is also a very good look for the women in dancehall as the men are usually at the forefront, but us women are making huge strides," she said.

In one of the photos on the calendar, Sher shows off her million-dollar assets and mounts a ladder in her white fishnet stockings. She also flaunts a busty package which leaves no doubt that she deserves a trophy for ultimate combination of fullness, proportion, and pertness.

Sher believes her new, enhanced figure has a lot to do with her being the Magnum Tonic Wine final choice.

"Before the surgery, I was just an ordinary girl, struggling to get paid, but now I am making a lot more. It is really more profitable. Before I did my body, I couldn't hold on to a price. Now, I do, and whatever I lay on the table, that is what I get paid. I have a whole lot of jobs coming in," she said.

Sher stated that it was rapid weight gain that led her to the decision to undergo enhancement procedures.

"I was really overweight. I was big like a house. I really wanted to lose weight really fast, and mi nuh really know much about healthy eating. I also wanted to get rid of the weight fast and didn't want to spend the five or six months at the gym to burn it off, so I decided to do a breast lift and liposuction," she said.

It has been five months since the procedure, and although she is still in the healing process, Sher said she is pleased with the results.

"It really painful after surgery, but the painkillers dem a work. The doctors did a really good job, and me really pleased with the way dem do it. It will take another month or so for me to be fully healed as the process takes six months, but I'm loving every inch of my body," she said.

DHQ Sher shot to prominence in 2012 when she won the Dancehall Queen competition. The 26-year-old entertainer has shown off her moves in several music videos, including Aidonia's Boring Gal, Kalado's Personally, and Konshens' Walk and Wine and Jiggle. However, a career in dancing isn't at the forefront of her life now as she is more focused on the entrepreneurship side of things.

"Dancing will forever be in my blood, but it's on the back burner for now as I am more focused on the business side of things," she said.

Earlier this year, she launched her Da Queens lipstick line, which she said is a hit among the females in the dancehall.

"I really saw the need to start this type of business as I really like cosmetics. Also, I wanted females to feel confident and sexy as it relates to their appearance," she said. In addition to promoting Da Queens, DHQ Sher is also preparing to open her clothing store in February.