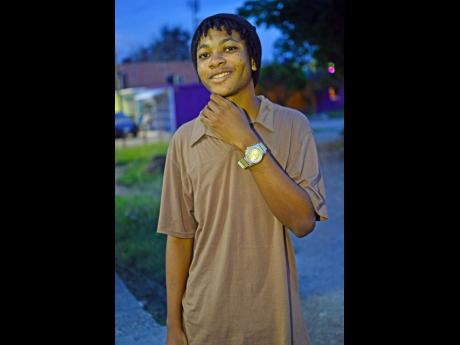 New dancehall sensation Shamayne has appealed to the psyche of females with his single '9 to 5'. Born Shamario Taylor, the entertainer, 18, said the females have being going wild on social media for the song.

Shamayne started recording with only a mic and a desktop in a room, which brought forth songs like 9 to 5.

He said he does a mix of R&B and dancehall, but stressed that artistes should not put themselves in a 'box' and "try to indulge in music in whatever category it may be."

"I'm open to do different types of music so I wouldn't limit my abilities and push myself to do any genre possible," he said.

Shamayne also said he's currently working with veteran artiste Mr G to improve his craft. His latest track is produced by Richie Beatz and the music video will be out coming by June.

"We have already started shooting scenes and working on more tracks," said his father Venjance, who is also a recording artiste.

Shamayne was born in St Mary but grew up in Hamilton Gardens, Portmore.

He attended Independence City Primary then went on to the Meadowbrook High School where, in his first year, he recognised his love for music and constructed his first song based on names that other children were calling him.

"After writing my first lines I performed it in class during lunchtime where there was a group of children, and the song captivated their attention," said Shamayne.

He said that he is inspired by the likes of Bryson Tiller, 6lack, Wiz Khalifa and Kranium, but most of all by the late Michael Jackson.