Studio Vibes: Jam One aiming for the ideal studio sound 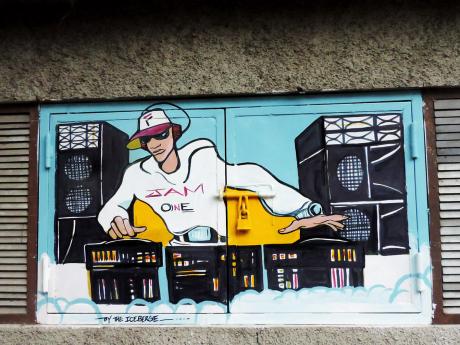 A mural in homage to the sound system at Jam One's Minott Terrace, St Andrew, base. 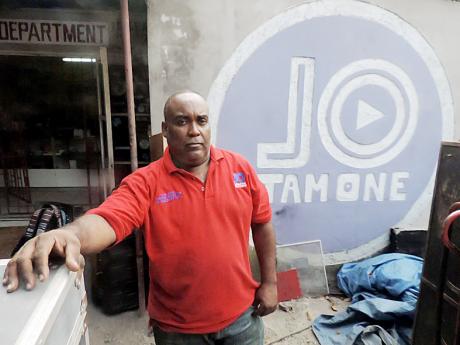 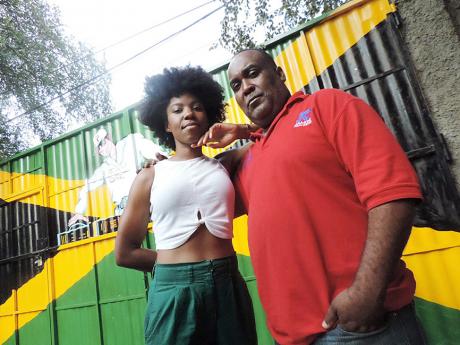 Alanna 'Bonjay' Stuart (left) and Tony Myers of Jam One sound system at teh Jam One base on Miniott Terrace of Chisholm Avenue, St Andrew. 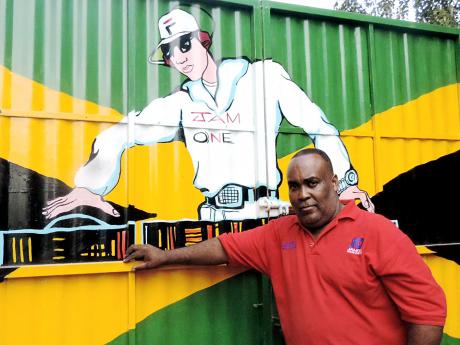 Tonmy Myers of Jam One sound system and president of the Jamaica Sound System Federation.
1
2
3
4

Tony Myers gives THE WEEKEND STAR a striking demonstration of the first step in putting a recording studio together.

He slaps his palms together, the sound cutting through and carrying over the sounds at the Jam One base on Minott Terrace, off Chisholm Avenue, St Andrew.

"You go in the room and clap and see how the sound moves," Myers said.

Each room has a different sound, he said, so starting from there, he can decide where to put in the material to get the studio's ideal sound.

It does not hurt that in addition to running Jam One which, in addition to its own dates, provides the sound and consoles for the weekly Boom All-Star Sound Clash series currently on at Olympic Way, Myers can play the drums (trap set).

He said his ability was shaped in part by his father's tutoring as he quizzed his children when they were listening to the radio. Plus, his brother plays the bass and lead guitar, as well as the keyboard.

"Mi get the ear for music," Myers said, noting that he can tune a guitar just by listening to its sounds, without the accustomed tuning aids.

Myers, who chairs the Jamaica Sound System Federation, has applied those skills to various studios, including Jammy's studio in Waterhouse and Black Scorpio's set-up on Molynes Road.

Lloyd 'King Jammy' James confirmed Myers' skill, telling THE WEEKEND STAR "is only good things I have to talk about him ... as a studio engineer and a technician from long time, I see that him know what him a do. I prove that."

There is an extensive electronics repair facility at Jam One and Myers says that mixing boards are some of the equipment that come to him for repair.

When putting a studio together, he said the voice room is the key spot.

"When you go in it, you're not supposed to hear anything," Myers said, adding that the ears can even give a little 'pop'.

Like many studios, he has used foam specially shaped into traps to contain and direct the sound (he credits King Jammy for some instruction); the studio is scheduled to open later this year.

One of the persons ready to record is Alanna 'Bonjay' Stuart. Bonjay, from Canada, has a healthy dose of Jamaican heritage and is ready to proclaim her Jamaican Love in song.

Now on her third trip to Jamaica, Bonjay said Myers made her feel welcome at Jam One.

As a sound system operator, cutting dubplates is an accustomed activity for Myers, but he is eyeing more widespread play than on Jam One.

"I want to get into production," said Myers, identifying mastering as one of the services he will offer.