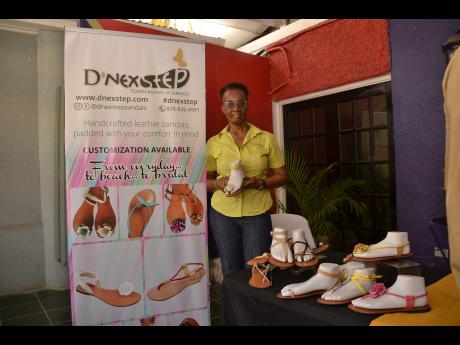 Local entrepreneurs who will be selling items at this year's Reggae Sumfest are praising organisers of the festival on their decision to go cashless.

The announcement was made at the headquarters of Downsound Entertainment yesterday.

Sumfest will partner with Mastercard to give patrons a safer, more efficient way to purchase items come July 15 to 22.

With the Sumfest team introducing a 'mall' concept this year, in terms of the set-up for vendors, the cashless system will maximise the consumer's shopping experience at Catherine Hall.

"We've always had vendors at the festival but the way we are presenting them this year is a bit different. We will be making sure we have those credit card machines all over the venue, anywhere you will need to make a purchase, if it's drinks, more tickets at the venue, the food court or the mall," said Marcia McDonnough, marketing consultant for the festival.

Present at the media briefing, disclosing the details of the partnership with a few of the vendors who will be stationed at this year's mall.

Pointing out that not only is the cashless option safer for patrons, a few of the vendors highlighted that the move may maximise their earning potential.

"Going cashless makes sense because I don't think a lot of people necessarily want to walk with a lot of cash, and when you come to a festival like Reggae Sumfest, there is so much more to do than just watch the show. There are a lot of vendors selling stuff and people will pass through, like something, and don't have the money just because they didn't want to walk with a lot of cash," he said. "This will be my first year selling at the festival but I'm looking forward to some good sales with the card system in place."

"I know for a fact that when people come to these festivals and they stop by the stalls they will see something they like. Many of them will want to buy but not have the cash. With the card, you can get what you want on the spot," she said.

For potential patrons without a Mastercard, Uhriel Bedoya, Mastercard country manager, encouraged patrons to get one before making the trek to Montego Bay.