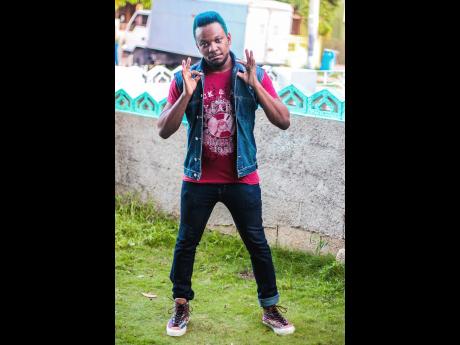 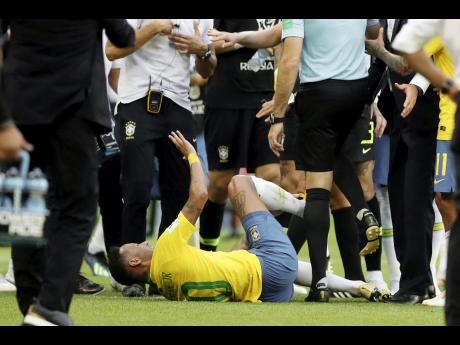 Brazil's Neymar lies on the ground following a stamp on his ankle by Mexico's Miguel Layun during their FIFA World Cup round of 16 game. (AP Photo/Thanassis Stavrakis)
1
2

The FIFA 2018 World Cup is drawing to a close with France and Croatia scheduled to play for the coveted trophy on Sunday.

But while the action on the field may be ending soon, at least one dancehall artiste is hoping to score a hit from all the antics that have gone down at the tournament, particularly the actions of Brazil's top striker, Neymar Jr.

Recording artiste Ganggoolie has released a single, Neymar Dance, and the track has been steadily gaining attention via social media.

The song talks about the footballer's ability to fall to the ground after the slightest tackle from an opponent.

Neyamr's actions were turned into memes which were flooding social media during Brazil's run in the World Cup, and although the giant footballing nation was eliminated last Friday, Ganggoolie still saw Neymar's actions as an interesting topic for a song. The dance involves people tumbling on the ground, while pretending to be writhing in pain.

"Neymar Dance ah tek over Jamaica right now, everybody ah upload it, everybody a share it. It is the fastest-rising song, bigger than the Usher Him Out. Selectors ah talk about it in the dance and it really a get some attention right now," he said.

Ganggoolie said selector Lizard Hype sent him a rhythm about a week ago, and he did the song at a studio in Old Harbour.

"The engineer Brandon sent it on WhatsApp and from mi send it, mi see the song ah come back to me. In the space of 24 hours, the song go viral. Everybody ah share it, people from all over the world ah link me. The song ah buzz, it hot like wildfire," Ganggoolie said.

No stranger to social commentary and doing songs based on things that have become popular in the social media space, Ganggoolie said he has no issues with doing songs people might call seasonal.

He believes that as long as there is something out there that becomes 'talk of the town', he will never fall short of material to put out.

Jamaicans are not the only people having fun because of Neymar's World Cup antics. Club Tijuana in Mexico had a 'Neymar Challenge', which features competitors rolling on the pitch.

A video which circulated on social media last week shows young boys practising their football skills. When the coach yells "Neymar", they all fell to the ground rolling and holding their ankles pretending to be hurt.

It is being reported that the Brazilian striker spent a total of 14 minutes on the ground during his World Cup matches.