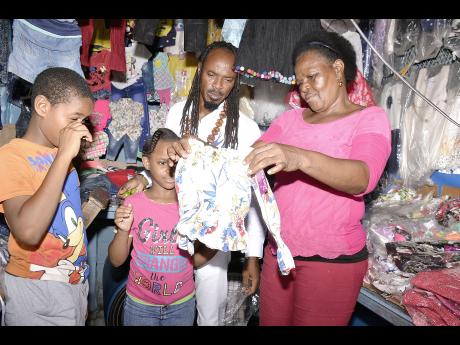 Entertainer LA Lewis (centre), is assisted by Doreen Gordon in selecting clothes for his children, Gabriel and Gabrielle in downtown, Kingston on Saturday. 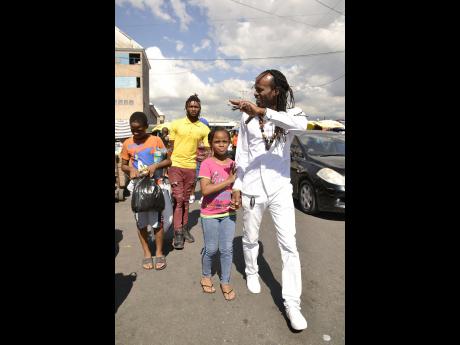 Christmas is coming and LA Lewis is out shopping with his children. 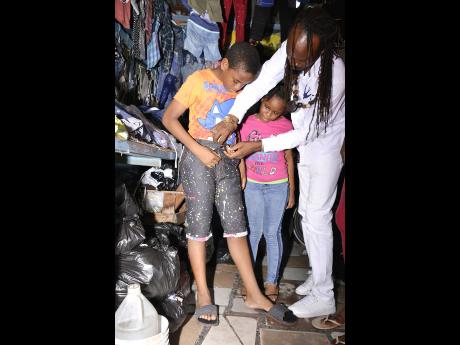 Entertainer LA Lewis helps his son Gabriel to fit a pair of jeans while doing Christmas shopping in downtown Kingston on Saturday. 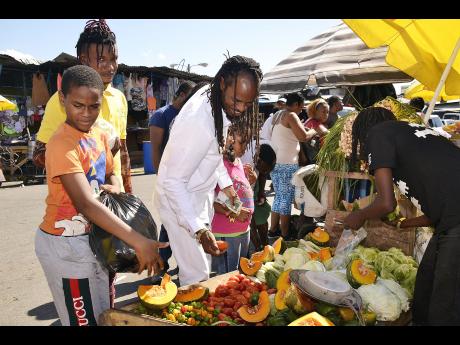 On the second day of Christmas, LA Lewis took his children shopping downtown.

When The STAR met up with the entertainer over the weekend, he was set on doing early Christmas shopping for two of his seven children, Gabrielle and Gabriel. As he selected several suits from a store owned by his mother, Doreen Gordon, which is located on Pechon Street in downtown Kingston, the entertainer said that shopping for his children is part of his routine during the yuledite season.

"Me shop for mi kids dem all the time, but yuh know say Christmas special, so dem time yah, mi line dem up and carry dem come shop. Dem love the expensive tings, but mi teach dem how to save and let them all know say Christmas is for giving and them must always remember the less fortunate," LA Lewis said.

Unlike their father, Gabriel and Gabrielle do not limit themselves to wearing only white. They choose more colourful pieces of clothing.

After clothes shopping, LA Lewis took his kids to shop for ground provisions. As they made their way along the market, there were numerous greetings from his fans, who all shouted, "Seven", as they acknowledged the Seven Star General.

"Mi shop almost every other week because you know say I have to choose the food that is 'sobolious'. Yuh see how down yah full a vehcile and ting? Mi a try beat the rush and stock up on sorrell and some other tings," he said.

Christmas in Jamaica is always incomplete without sorrel.

"Mi is a hard-working man, so mi have to feed miself good. Ano mi a do the cooking thing this Chrsitmas. A mi madda a guh prepare all a dem yah, but after mi carry the kids go a the Catholic Church a Cross Roads on Christmas Day, mi a guh put a whole heap a gift in mi jeep and just go round and hand out. Mi always a give out gifts, but you know say mi never get any yet," he said between laughter.

He told The STAR that the yuletide season has changed over the years, stating that things are not as 'merry' as before.

"Nobody nah too string up nuh pepperlight like one time because JPS ago kill dem later with bill. People nuh really have money to shop, but most of all, people stop giving. Christmas a the time to give and share love and just celebrate the birth of the creator, but that nah too happen. I recognise the birth of the Holy Saviour at this time of the year and pay my homage," he said.