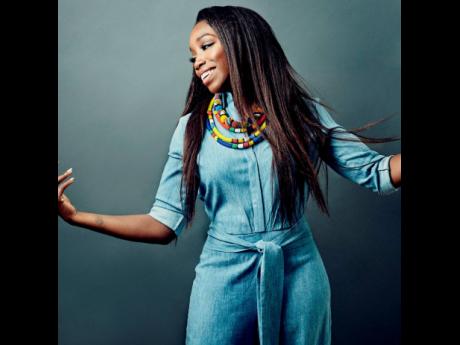 It was felt in some circles that Estelle’s first reggae album Lovers Rock (2018) would have been a contender for this year’s Best Reggae Album Grammy award. Much to their surprise – and hers – it wasn’t.

When THE STAR asked if she was one of the persons who had expected Lovers Rock to receive a nomination, Estelle laughed happily and yelled: “Me too! I thought it would have been in there!”

However, judging by her easy response, Estelle is still in good spirits although she was left out of the nominations. After all, she is already a Grammy award-winning artiste, taking home the award in the Best Rap Performance category for American Boy, her 2009 collaboration with Kanye West.

She is now focused on presenting her hard work to, hopefully, hungry audiences.

“I do it because I love the music. I have music in my core – rocking my life. I’m not worried or stressed about that. I care that people love the music,” she said.

‘The people’ are primarily the reason Estelle is excited to kick off her tour on Thursday at Coral Cliff in Montego Bay.

Estelle has said that visiting Jamaica is always a big moment for her. This time is no different.

“My parents introduced me to Jamaican culture and taught me how to respect it. I’m excited to do the show and have a good vibe. There are people who I have to touch, who have to see the album in person,” said Estelle, who was born to a Senegalese father and Grenadian mother

The singer, who grew up in the UK, said that she used reggae, soca, afro-beats and dancehall to musically portray the winding road of her parents’ relationship.

So far, Estelle has released music videos for the singles Better and So Easy. Next up will be Lights Out. All together, the visuals should take viewers through her parent’s love story.

Based on the fact that she will be performing songs from the album, THE STAR asked if any of her collaborators will grace the stage on Thursday.

She coyly replied: “There might be. You’ll just have to come and see!”

Meanwhile, rising reggae starlet Naomi Cowan will be opening the stage for Estelle. For Cowan, it feels like her interactions with the star has come full circle.

“I’m actually in one of her music videos – with Sean Paul,” Cowan revealed, explaining that while she was living in Toronto, Canada, she was contacted to be part of the shoot.

Now, the request is to take the stage at Estelle’s show. Cowan considers the appearance to be an affirmation.

“It’s just a step in the right direction that I could be aligned with her and share a stage. It’s an honour and an encouragement. For upcoming artistes, things can feel overwhelming, because we’re doing a lot of things with little resources. But with things like this, I’m excited,” she said.