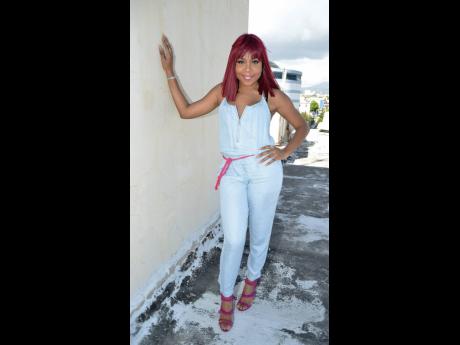 Songstress Kim Nain is already amping things for 2019, with the release of Deal Wid It, the lead single and title track from her debut album released last November.

Over the weekend, the attorney/singer premiered an alluring visual for the song via several major platforms, including her official Vevo account.

Shot throughout the picturesque thoroughfares of Kingston and St Andrew by XtremeArts, the very provocative video sees Kim and her featured guest, Destiny Sparta, playing out their fantasies in various scenarios with a shirtless muscular love interest.

Since the premiere, Kim says she has been receiving positive feedback from various quarters within the industry.

"I released the song late last year and so far the feedback has been tremendous, therefore, doing a video was definitely the next step in our campaign, considering we currently operate in an industry that is very visually driven," she said. "However, I didn't just want another video but instead something that depicts who I am and captures the essence of my artistry."

Manager and head of John John Music Group, Shelly-Ann Curran, underscored Kim's point, citing that, "Shooting videos nowadays is not just about getting something out there on the screen but instead to create a product that is going to become a conversation piece and make people want to know more about your craft.

"Aside from the concept, the inclusion of Destiny Sparta was another strategic move because of her unorthodox style," she said.

In the meantime, Curran intimates that the video is only one of many nodes of the overall campaign as they continue to feverishly promote the 11-track compilation produced on the John John Music Group and DZL Records imprint.