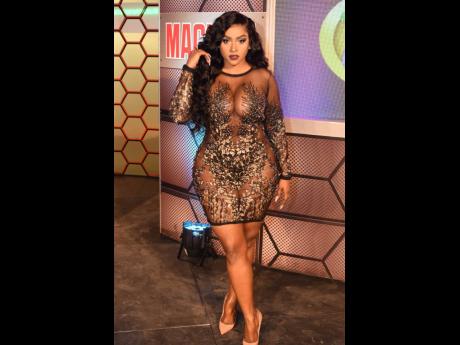 Yanique 'Curvy Diva' Barrett created a social-media firestorm on Wednesday night when she posted a video of herself with what appeared to be a baby bump.

In the video, the TV host-turned-recording artiste can be seen rubbing her belly, which was protruding from her silk dress.

Although the Curvy Diva did not mention anything about expecting a child in the post, the vision of her raised belly was enough to cause speculation.

Almost a thousand persons commented on the post, the majority of whom sought confirmation from the Curvy Diva on whether or not she was indeed with child.

When THE WEEKEND STAR contacted the artiste, her publicist, Janice Young, said that her client was only pregnant with ideas and new music.

She said the Curvy Diva's only 'baby' on the way is her debut album.

"The only thing 'baking' right now is her album. It is supposed to drop later this year, and she is fully focused on that. It is the only baby she's thinking about at the moment," she said.

Young said the album process is still in its early stages, so she cannot divulge too much information until mid-May.

"It's not at a place where we're ready to talk about it as yet because the songs are still being written and so on. So in terms of the feel of the album, or anything like that, we can't tell right now. We will be able to give more understanding of what the project is gonna sound like around May," said Young.

In addition to her upcoming album, the Curvy Diva also has a collaboration with Demarco that is expected to be released soon.