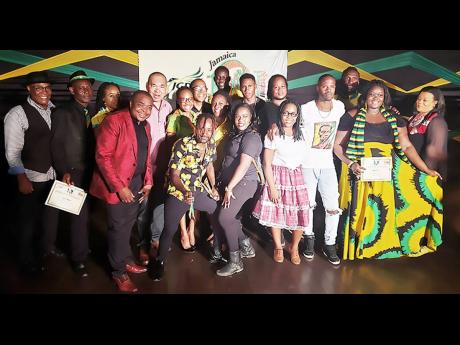 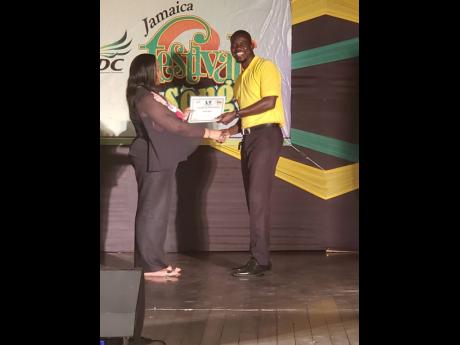 Jerome Smith being presented with a certificate of participation by Daffodil Thompson, interim executive director of the JCDC. 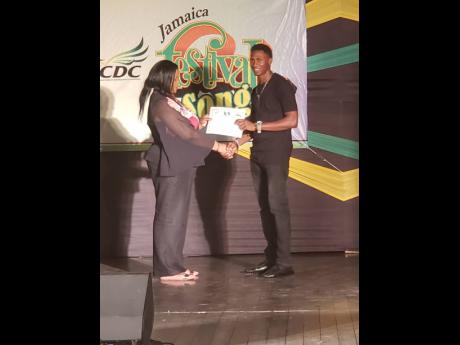 Nicoy Green being presented with a certificate of participation by Daffodil Thompson, interim executive director of the JCDC.
1
2
3

The two Festival Song Competition finalists from central Jamaica are confident that they can win the national competition, which is organised by the Jamaica Cultural Development Commission (JCDC).

Nickoy ‘Shawn D’ Green from Manchester and Jerome ‘Jay Smith’ Smith from St Elizabeth are carrying the central Jamaica flag in the competition.

Smith, a teacher and computer specialist, has been selected for his entry Embassy Appointment, which was written by Allison Morris.

“We are feeling positive, yet humbled about the opportunity that myself and Mrs Morris have received,” Smith said.

In Embassy Appointment, Smith relates the experience of Mr Brown, who is trying to get a visa to travel to the United States on vacation.

The consular officer insists that Mr Brown prove that he will not run away or overstay. The patriotic Mr Brown responds that he has no reason to leave Jamaica as his country is naturally beautiful and has a lovely climate.

“We can’t left Jamaica because Jamaica is the perfect place to live, ” says the song.

“What is on my mind is getting this song out there and letting Jamaica get a feel of what St Elizabeth has to offer because St Elizabeth has a lot of talent,” said Smith, who teaches at the Bethlehem Moravian College.

The other central Jamaica finalist, Shawn D, is hoping that his entry, Sweet Jamaica, can influence persons to change their behaviour and attitudes.

“I did the song to appeal to people’s emotions. I recorded the song, and I go around and sing it at some JCDC concerts and at schools. They liked it, and they said I should enter it,” he said.

“I didn’t write the song for JCDC. I was just sitting down at home, and based on how Jamaica is running, with the crime and violence, I was just thinking about how I could help. I just want the country to change and unite and make the country a better place,” added the recent high-school graduate, who hails from Green Pond, Manchester.

Shawn D said that he has dreams of becoming a recording artiste and that the JCDC has provided him with the perfect platform from which to launch his career.

“Before my grandmother died, she said that if she is living or dead, I should keep on doing positive things,” Shawn D said. His grandmother, Megan Morgan, died a month ago.

Shawn D said that if he wins the national title, he will use his fame and achievements wisely. And he is already over the moon, having made it to the finals.

“It feels wonderful as for the first time entering, I am surprised that I have made it to the finals,” he said.

A large and enthusiastic crowd turned out at the Ranny Williams Entertainment Centre last Saturday for the semi-finals. Shawn D and Jay Smith were among the 10 contestants selected from a pool of 25.