The Chop Chop Boss on a money pree 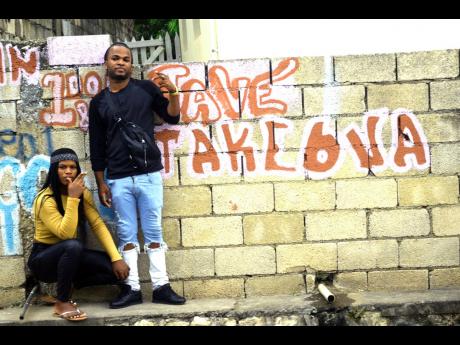 Dancehall artiste Take Ova (right) hangs out with a friend.

Trelawny-based artiste Take Ova, also known as the Chop Chop Boss, is convinced that he can make an impact on the dancehall scene.

The entertainer, whose given name is Cornelius Fletcher, is from a little-known district called Kingsloo in Clarks Town. He spoke of his ability to make fast money but was quick to add that this wasn’t about scamming.

“When I say ‘chop chop’, it doesn’t talk about one particular way of making money; it could be farming, baking or construction.

“Before I took up music seriously, I was a chef at Riu Hotel in Montego Bay. That is where I took on the slang ‘chop chop’, and my production team, T3M, run with it,” he said.

Take Ova has a song called Chop Chop and another called Polo.

“I collab with Hot Frass from St Thomas on the track Polo, and the feedback has been good for that song. Polo is on all discjocks’ playlists. It is having heavy rotation on radio stations and in the dancehall.”

Polo is actually a follow-up to Chop Chop. Take Ova has another song called Fast Food, which features Teeardropz.