‘I really miss her’ - Young entertainer mourns passing of his babymother 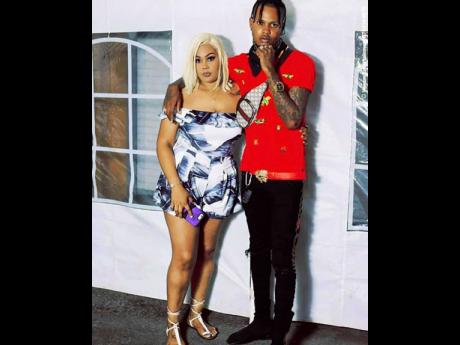 Fresh King and his girlfriend, Junique Chung, in happier times.

The past two weeks have been very difficult for rising entertainer Rohan ‘Fresh King’ Clearly.

On April 28, he said that his life was changed forever when his babymother, Junique Chung, succumbed to injuries she received in a motor vehicle accident. Fresh King, who was the driver of the doomed vehicle, received multiple injuries and is recuperating at home, while the other occupant in the Tiida motor car remains hospitalised.

“She was a real girl. She had a very beautiful soul, and I really miss her. She was my biggest fan. She supported my music a hundred per cent. This was our sixth year together, and she was a very good mother. On Sunday, she would have celebrated her second Mother’s Day, and that just didn’t happen. She had a lot of ambition was supposed to be sitting her CSEC (Caribbean Secondary Education Certificate) exams now,” he said.

According to the police, the Tiida motor vehicle and a Mitsubishi motor car were travelling in the same direction when the driver of the Mitsubishi attempted to pass.

It is reported that the Mitsubishi clipped one of the rear wheels on the Tiida, causing the driver to lose control of the vehicle before it slammed into a utility pole near the intersection of New Green and Clarke’s Town roads in Manchester.

Chung, who would have celebrated her 20th birthday last week, was thrown from the Nissan Tiida after it crashed and split in two.

A devastated Fresh King said he was told that he lost consciousness when the accident occurred and had no idea that his girlfriend was killed in the crash.

“The doctors had told my father to tell me that she was on life support, but [at] that time she was already dead. I guess they didn’t want me to know because I was also badly injured. When I heard that she died, I didn’t believe. But then I had to believe when I saw it being circulated in the media. It is rough, and it’s hard to accept that she really gone. I can’t stop say that she was the ‘realest’ on my team. The show that I got at the school, it was she who got the booking for me,” he said.

While the painful memories of that traumatic morning will forever linger in his mind, Fresh King said he will continue to pursue his music career, stating that his late girlfriend will still be a major influence on his career.

“I am going to do the music even harder because I want her spirit to be proud. It is hard, but I am not going to ease up. I am going to continue this legacy for her,” he said.