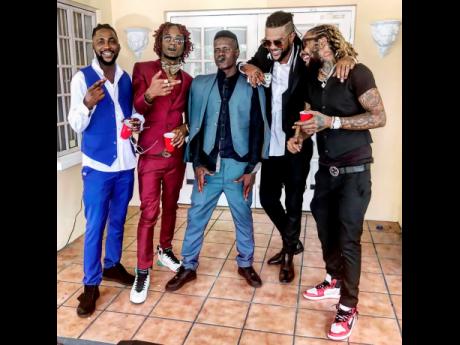 Dancehall group 1 Squad is ready to take the music globally with the release of their latest track, ' Popping Over Here'.

Released earlier this year, the song is all about living the desired lifestyle of being successful, making a lot of money, travelling the world with a sexy woman by your side; it's definitely something that many men can relate to.

Produced by Starstruck Records/Danger Zone Music, the track is already a headbanger; the single's raw, unapologetic vibe makes it a must-have party staple.

"This track is destined for greatness, people just love it. I am still overwhelmed by the positive feedback so far, especially the love that I have received from our fans," said team member Esco.

The five-member team consists of Esco, V8nam, Poppin, Talis and Sultan, with Danger Zone Music's Edward Warren and Delmar Drummond at the helm as managers.

Although only a few months old as an official team, 1 Squad has been working consistently on building their brand and have their sights on becoming the most popular dancehall bad-boy group ever to be formed in Jamaica.

Their aim is simply to introduce, market and expose dancehall talents through unification. Also, they want to bring a different look and style, sound and delivery to the dancehall community, and the world by extension, all while showcasing the individual talent of each artiste within the group.

Popping Over Here is one of the first tracks to be released by 1 Squad and the group members plan on following up with more music of this nature.

"It's all about keeping the momentum going and supplying the demand for music that especially the younger generation can rave to," said Esco.

The accompanying music video for the single has been released and is reportedly racking up the numbers on YouTube.