Loaded Eagle looks to fly away with Festival Song title 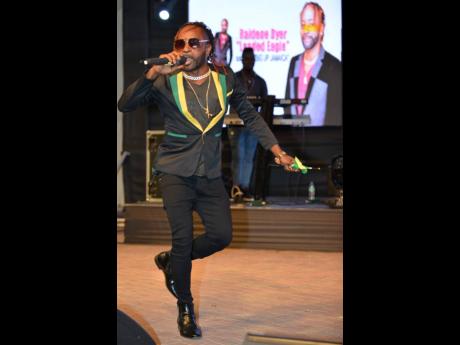 With a name like 'Loaded Eagle', 40-something-year-old Festival Song finalist Raldene Dyer is one of the favourites in this year's contest because of his natural charisma and bombastic onstage energy.

"My friends gave me the name 'loaded' because I am a baller, barber, professional dancer, dance teacher, choreographer, songwriter, and part-time actor. I am loaded," he said, laughing.

Dyer said his friends added 'eagle' because of the prophetic and revelatory nature of his lyrics.

It is hard to tell whether Loaded Eagle had foreseen that he would have been a finalist in this year's competition with his entry, Big Up Jamaica, but he longs for the Jamaica Cultural Development Commission's festival song to return to its glory days.

"As a youth, festival song contest was a staple of the household, we would gather around the TV and watch Eric Donaldson, Roy Rayon, and the Astronauts. This new push is making the festival relevant again, even on social media, and I am part of this new movement because I am a big influencer in St Ann and neighbouring parishes; ask people bout me," he said confidently.

He grew up in Steer Town where he attended Steer Town Basic and All-Age schools before matriculating to Marcus Garvey High School.

He played football at high school but admitted that because of his "troublesome, hyperactive" nature, he didn't make the team.

When he left high school, he joined a dance group called the Cosby Kids and in 1998, they won the best popular dance skit in the JCDC dance competition.

Afterwards, he teamed up with a dancehall group called SLR, which featured two other artistes, but the group failed to make an impact, despite being invited to record with stalwarts such as King Jammys and producer Robert Livingston.

"The group just wasn't ready vocally to take off. I was always ready; one member migrate and the other my good friend, Solid, supports me like a road manager on my journey as a solo act. As an artiste, I have a young spirit. Over the years, my attitude has never changed, even though I am a responsible father, I am playful and have a joy for life," he said.

He believes that his natural joie de vivre can help him stand out in the contest.

"I have a very good chance to win, I am super confident, come take me in on my next performance," he said, laughing.