Shawn D hopes to be catalyst for change 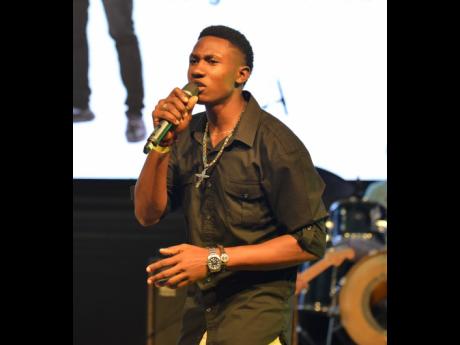 Festival Song finalist Sean D is one of the youngest entrants in this year's contest.

He believes that he has an incendiary, life-altering message, and as a 19-year-old urging his peers - who are often the perpetrators of violent acts - to choose peace instead of war, he can be a catalyst for change.

"I am a young man pleading for the crime and violence to stop. In my song, Sweet Jamaica, I am asking for peace and love to change the mindset of the youths, I am trying to set an example for the young people because they are the ones who are sometimes driving the crime wave, and if they change, Jamaica can be a better place," he said.

Sean D, whose given name is Nickoy Green, grew up in the Green Pond area in Manchester, where he first attended Old England Primary School before moving on to Winston Jones High School and finally May Day High School, where he distinguished himself in a youth education initiative, Career Advancement Programme in renewable energy.

However, once he left high school, he was bitten by the music bug.

"Music was always my thing. My father was a musician who used to run a band, and when I used to go to concerts and perform, the excitement, the stage, the way people reacted to me, I just fell in love with music at an early age," the artiste said.

He entered the Jamaica Cultural Development Commission's preliminary contests in both the Gospel and the Festival Song competitions.

"My friends had suggested I enter the Gospel Song Contest, but the judge stopped me, so that didn't work out. But then I entered the Festival Song with an entry and they called me to let me know I was in the top 20; I was on my way," he said, laughing.

Sean D eventually made it to the top 10 as Sweet Jamaica will compete for the top prize when the winner will be announced at the grand final later this month.

The Festival Song Competition is one of the longest-running original song competitions in Jamaica and continues to unearth and showcase several talented individuals each year.

He believes that he has a great chance to win the competition's grand final, at which the ultimate song, the one that will form the soundtrack for Jamaica's 57th anniversary of Independence, will be selected.

"I believe I can win. My message is unmistakable and irresistible, peace over war, love over violence, I am setting an example for my generation," he said.