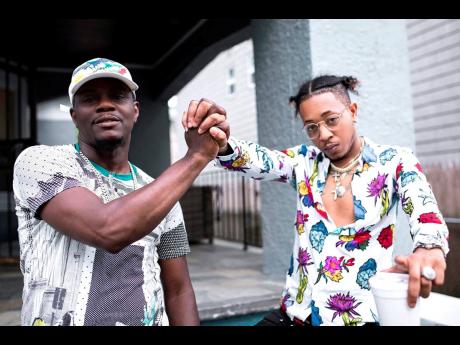 Recording artistes Kappa and Shootii are aiming to make their musical mark this summer with the release of their latest single, 'Touch Road'. The entertainers, who are based in New York, said that with artistes all over the globe taking on to dancehall music, they are hoping to stake their claim on a growing industry.

"Dancehall is no longer confined to Jamaica and is now a global genre. So as artistes based in New York, we wanted to represent for the culture and give fans an opportunity to see the music from our perspective," Shootii said, pointing out that the Jamaican audience will be one of their main targets going forward.

Kappa confirmed, saying: "The dancehall scene in New York is very active, and we are thankful for the level of support the song and our careers have been receiving. But it's equally important that we connect with our roots, seeing that we do get a lot of support from fans in Jamaica, and hence the reason for the push into the local market."

According to the artistes, the single, which was released on the Chemist Records/Buzuwa Records imprint, is already enjoying favourable rotation on the US East Coast and continues to make inroads throughout the Caribbean diaspora with a heavy focus on Jamaica.

Although the song has been getting some amount of support from local deejays, including ZJ Liquid, the pair have already put plans in place to amp up promotions.

Kappa and Shootii say they have a team that will be hitting the streets at various dancehall events to increase support for the track. A music video for the song has also been released in an effort to boost promotion. The video, directed by New York film outfit Troublesum, was shot in the US and is available on the artistes' VEVO channel.

Shootii, who was born in Clarendon but migrated to New York, has worked with several local entertainers as he continues to hone his craft - Beenie Man and Frisco Kid being among them. Kappa, who was born and raised in New York, says he has always had a special connection to Jamaica and dancehall music. He recently acted as the opening act for international dancehall star Kranium at a major overseas concert, a feat he considers a career milestone.