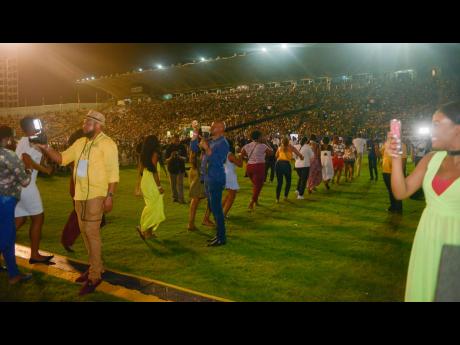 Moments after security used force to clear worshippers from an area deemed a fire hazard, upset patrons formed a queue and marched back into the space singing “Around the Walls of Jericho” duing Unity in the City held at the National Stadium on Saturday. 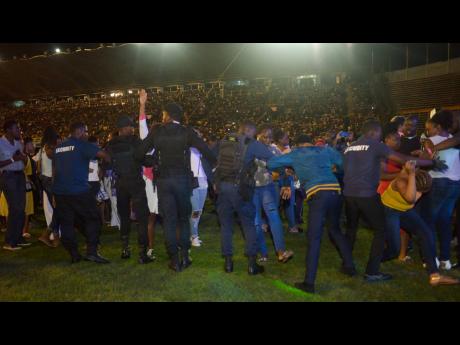 After ignoring several warnings to clear an area deemed a fire hazard, members of the security team formed a barricade and pushed worshippers from the space. 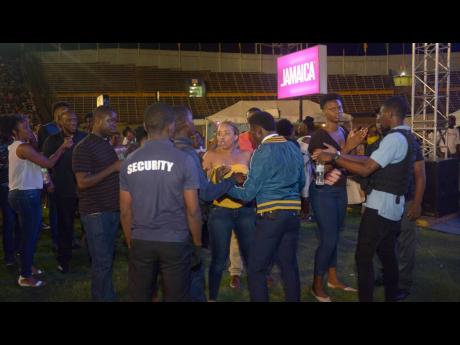 A gospel event is the last place you would expect to experience contention or combative behaviour, yet some patrons at last Saturday's staging of Unity in the City found themselves tussling with security personnel to get an up-close view of performers.

The event was held at the National Stadium and hosted performances by some of gospel's finest like Fred Hammond, Tasha Cobbs-Leonard, Minister Marion Hall, and Rondell Positive.

The altercation started when some worshippers in the VIP area crowded an area directly in front of the stage to record their favourite gospel singers.

But they were advised by fire personnel to relocate to their designated spots as the area was a fire hazard.

Ignoring the warning, the patrons were met by a group of security officers and a shouting match ensued while American singer Fred Hammond performed.

Hand in hand, security personnel formed a human barricade and started marching forward to push patrons away from the area, which saw some people sneaking under the linked arms to return to the spot to resume their worship experience.

Members of the Jamaica Constabulary Force were eventually summoned, forcing some patrons to retreat.

But as soon as Hammond's performance ended and a band change for Cobbs-Leonard was under way, worshippers formed a queue of their own, chanting the Christian chorus Around The Walls Of Jericho, with some shouting "Devil hold yuh position!" at the officers. They were later joined by other persons, before dispersing to their assigned ticket areas.

Executive producer of the event, Antoinette Ennis, said she had not received reports of the above, but said the matter would be investigated.

"It is our desire to ensure that all our patrons have the best time at our events, therefore any reports to the contrary are most regrettable," she told THE STAR. "At this time, no member of the organising committee has received any reports from the security teams concerning altercations between the security officers and patrons, we shall be investigating this matter."

She added that any restricted area would have been authorised by the fire authorities for the safety of patrons, and not to interfere with their worship experience.

Since yesterday, several users have flocked to the event's Facebook page, blasting organisers about the stage placement and absence of advertised act Travis Greene, who performed last year.

Ennis said her team is currently reviewing the feedback from patrons, and will make an informed statement in due time.

"We are humbled by the support that we received for the event," she said. "Travis' absence (due to a scheduling conflict) was understandably disappointing, even for him. But the other acts were wonderful and delivered excellently and we thank God for that. We know that there are areas we need to work on going forward, so we shall be looking at that comprehensively."

Unity in the City had its inaugural staging three years ago, and was birthed as a gospel event to foster togetherness as the nation grapples with crime.