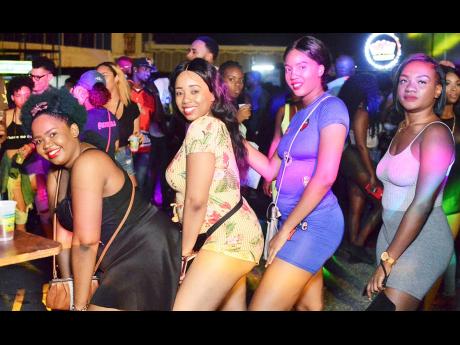 Beauties pause for a pic at Strictly 2K, held in May at Mas Camp.

DJ and promoter ZJ Chrome stated, "The song was not only a hit on the musical charts, but also created a huge buzz with its fashion. So we expect patrons to relive this great era in music by coming out in their straight jeans, fitted caps and white or black tees."

Marketing and communications director IB Konteh stated, "Patrons have been asking for a third staging in Kingston, as the wait until December is too long. This upcoming staging is eagerly anticipated based on feedback thus far from patrons."

Having executed successful productions in the US, the Strictly Team has all intentions to take Strictly 2K even further, locally and globally.

"This October, the target location was Ocho Rios, but due to issues relating to venues we decided to bring it to Mas Camp. This way, we could cater to partygoers who will be remaining in Kingston for Heroes weekend," said Konteh.

ZJ Chrome added, "The most important aspect of event execution is ensuring that the music selection is first-rate so the patrons can have a memorable experience, and that's what Strictly 2K promises to deliver."

Strictly 2K is widely recognised for its high standards, and this staging promises to take the experience up a notch.