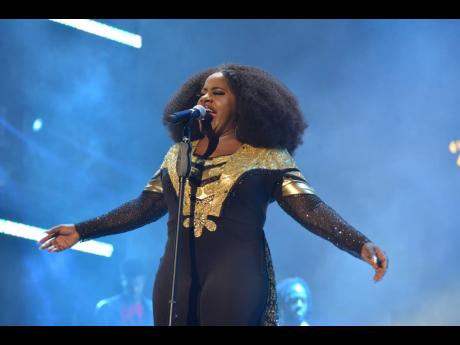 "The EP has love songs, message songs, and touches a little bit on marijuana," she said. Speaking to the title of the EP, it perfectly encapsulates the goal of showing bits of herself from different perspectives.

She added, "It's called Dimensions for a reason - it's a collection of moods. There are so many sides to me musically and I wanted to share some more."

While keeping reggae at the root of the tracks, Etana, dubbed 'The Strong One', brings a blend of genres and sounds, aided by powerful live instruments.

From the one-drop-style Long Draw to the soulful Rock My Body, as well as Love Is Us, which touches on a 90s R&B vibe, the EP surely showcases the quality and high standard of music that Etana has been known for over the course of her career. Other tracks include two versions of the track One More Time, with Jamaican artistes Beenie Man and Pressure Buss Pipe lending their voices to one version each.

Etana has been making waves in the industry since her debut album The Strong One in 2008.

The lead single, Wrong Address, which was released in 2007, earned her quite a bit of recognition at the start of her career, receiving heavy radio rotations and peaking at number one on several Jamaican charts.

Her most recent album, Reggae Forever, released in 2018, earned Etana her first Grammy nomination in the reggae category, becoming the first female artiste to be nominated in the category since 1997.

She is positive about her latest project and is hoping to transmit positive vibrations to her fans as well.

Dimensions will be officially released on November 8.