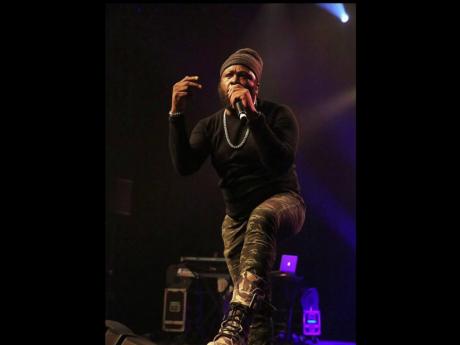 Hungry singer Fantan Mojah has been starving for a bite of the Grammy Awards for several years.

The artiste, who in 2005 stirred the musical pot with his debut album Hail The King, a reflection of socially conscious themes, told THE WEEKEND STAR he is all set to make a revelation with his latest album.

Having given the previous albums Soul Rasta (2016), Rebel I Am (2012) and Stronger (2008) at least four years apart to cause a stir on the local and international stages, he said it is about the right time to release another.

The fifth album, presently unnamed, will expose the lyrical and vocal aptitude of the roots reggae and culture artiste.

"I consistently put out a lot of singles, but when it come on to album, it different. The last album Soul Rasta just a warm up the world - it tek a while to pick up in Jamaica because the people not embracing the music. But overseas it tek same amount of time cause the listeners comb through it and select them favourite," he said. "It has been good strategy for me to space them out even when the songs might take three weeks to record, like for this new one. Memba seh anything buss fast, is like it collapse fast too. I am grateful for the growth."

The new year marks approximately 15 years of experience for Fantan Mojah, and he commemorates it with his return to the starting point - Downsound Records - to produce the latest project.

He shared, "It is the place that buss Fantan Mojah, and I can confidently say I created nothing but hits for them. So when Josef [Bogdanovich] say him ready fi do a next album, all me could say is gimme the riddim dem and work night and day to complete it."

The standard of the album he said is literally of high standards, "on a level where people never knew I would sing or could even manage".

Already he has been told that it is one that can be submitted for the 63rd Grammy Awards nomination later this year.

Fantan Mojah hinted, "It is a mix of love songs where the notes me hit higher, we talking falsetto levels," he said.

Ireland will get a taste of the album in February when he is expected to perform there on a show that also features Anthony B.

"Some people will come to hear the hits like the older songs, Great Man, Stronger, and Corruption, so many more. But no doubt, the focus will be shared with the new songs to 'guh fi dem'," he said.