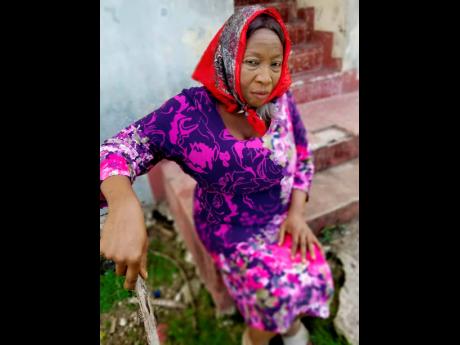 Veteran female dancehall artiste Macka Diamond has unveiled a new persona, which she says she will incorporate in her future stage performances.

On Thursday, the entertainer sent tongues wagging on social media when she introduced the new character 'Mackadocious', an 'aged' woman, complete with 'grandma attire' and wrinkles.

In an interview with THE WEEKEND STAR, the entertainer said that based on the constant banter from 'haters', she decided to give them something to talk about by drastically ageing herself.

She expressed that her new character should now fit in with the image naysayers have in mind when they think of her.

"A ready me ready now fi run out and look how dem wah me look. Dem get me going now because me a go show dem say me still hot all when me old up mi self," she said. "A diss dem did want so a diss dem a go get and it nah go stop me from run out and shell show because me talent nuh inna me looks."

The entertainer, who turned 49 earlier this month, has always faced backlash as some critics believe she is too old for the dancehall space.

That much was evident in the comments posted to various blogsites as the picture of Mackadocious made the rounds.

"Finally, she dress her age," one user posted. Macka Diamond is not surprised or moved by the comments.

"If people a beat me up every day say me old and dem see me dress like dat, dem must glad because dem still a go try at me but me just a make dem kill off dem self," she said. "But if me ever make yuh hear some voicenote weh me get from people a encourage me nuffi listen the haters, yuh woulda surprise. So more people out deh a say good dan bad. Dem feel like dem win me but I'm good, I'm doing me."

She added, "Me still a get bookings and me show dem still a sell off and most importantly, me still a inspire people fi check dem self and start live a healthier lifestyle. If me did a listen to haters, me wouldn't reach nowhere."