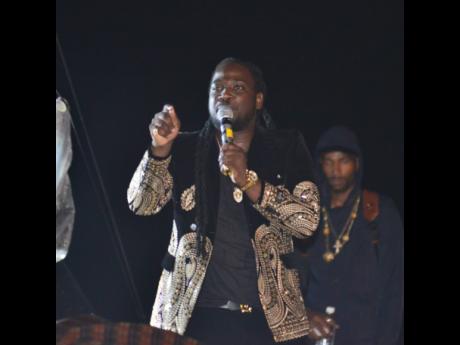 Dancehall-reggae artiste I-Octane says despite popular belief, his latest song and music video, Banga Fone, is in no way glorifying any criminal activity.

The entertainer told THE STAR that as an artiste, he takes on multiple personalities and plays different roles in music videos.

But he says that part of his life is separate from who he is in reality.

"We all know say is just metaphors and similes in this business. Sometimes we sing say we a floss when we really deh home. A lot of yute sing say dem rich and dem nuh really have no money fi true. Nuff man sing say dem a gangster but dem nuh really involve inna nuh crime," he said. "A man say 'banga phone raaay', it nuh mean him a call people and a try nothing. As artistes, we're just being creative. We're not glorying people's actions or telling them to go and steal people's money and those things."

He continued, "But because is a thing weh go viral inna Jamaica and people a talk bout it, we say we a go sing about this thing and dilute this topic. We want people to understand it and do better. That's where the inspiration came from. One of the greatest thing weh di people dem a say is that dem love the song."

The entertainer, who has been known to switch things up as far as material is concerned, says he enjoys producing cultural songs, but says he realises consumers tend to support the opposite way more.

"A lot of people been asking 'Yow Octane, weh di culture songs?' but I am saying to dem you're not supporting culture songs or the music weh speak of positive things. Me a watch the vibe and me get inspired to tap into what's happening and reinvent me sound. It's been working because it ( Banga Fone) has gone more than 100,000 views since last week and peaked at number 11 on the YouTube trending list, so people a support it."

The artiste says that while some may believe that as a seasoned entertainer, altering his sound to fit into today's landscape is not the way to go; he believes the opposite.

"A great leader is a great follower. A child shall lead the way, so me nah take the yute dem credit, dem inspire me to tap into this sound. We have more type of dem vibe deh coming to the people dem," he said.