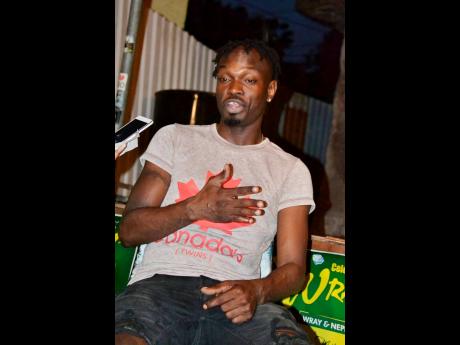 The usual tours of the famed Black Roses Corner, former home of legendary dancer Bogle, have been put on hold due to the spate of violence in the area.

Called the 'birthplace of dance', it is normal for tourists to frequent the area in search of surviving members of the Black Roses crew for dance classes.

But the dancers are shying away from this, according to Boysie, real name, Lonsdale Guy.

He said that like him, the dancers are taking the necessary precautions to keep the tourists safe.

"The best move was to postpone classes for the time being at Black Roses, which is close to the feud communities of Arnett Gardens and Jungle," he told THE WEEKEND STAR.

Last week's reports of the murder of Rumm Ramm, the personality who inspired the dance and song of the same name, shook the dancehall community, and was more reason to leave the cultural grounds alone.

"I have turned down opportunities to host lectures on the corner because I have to worry, not only for my life, but the safety of the visitors and children who often come out for the dance classes," said Boysie. "Actually, I don't want to have classes at Black Roses anymore despite the historical value of the place. That is the road many of us [dancers] learnt how to improve our skills and my mentor Bogle would be disappointed - everybody disappointed. I don't know what is happening in our country as people not thinking about how the violence affecting the proper promotion of the culture on all levels."

Boysie suggested that the violence was not linked to gang war or politics, but "more like best friend against best friend".

"And they bringing innocent people in the middle of it. We shouldn't be exposing people who don't even live here to all that negative energy," he said.

The dancer has hunted other suitable spaces to host dance classes and also revealed that not enough money is coming in through all the challenges.

"(So) dancers are collaborating more to write and record music which promote dance culture. Ding Dong started to do it and he is an inspiration, as someone achieving what he wants," said Boysie.

He recently recorded Logo Boss with long-time artiste Guidance, and Energy, another dancer popular in the streets.

The official music video was released last Wednesday, with the majority of the scenes shot at the Half-Way Tree Transport Centre.

"Many videos have been recorded at Black Roses, so we went somewhere else. We just want to be safe and to be supportive because it can benefit from all of us trying to make peace with culture and the children growing up, to learn about that, and not violence," he said.