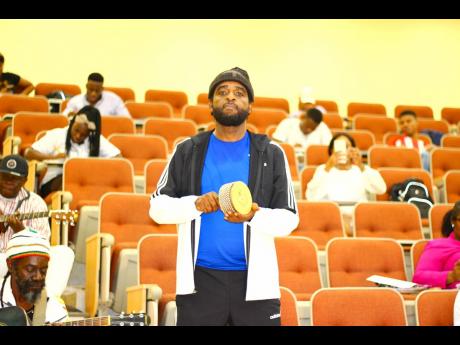 The five-track EP, which is scheduled to be released on Friday, March 6, was produced by Pinnock and was launched on Monday, February 17, to coincide with Reggae Month at the LT 48 Room at the UTech.

Pinnock recorded all the songs under his stage name, Ajaniah, along with the Real Roots Band.

The EP features songs To Fail Is Never An Option, Hopeless People, Blacks and Whites, Tell Me Why , and Charge Them Up.

Pinnock says he was motivated to record the EP after doing years of research on the impact of music on students who listened to reggae music during mathematics classes at the university.

"I've found that playing songs that have a positive message before the beginning of class sessions motivated students to work harder in class while instrumental music helped them to score higher in exams. The songs on this EP carry a positive and uplifting message. There are no instrumentals on it, however, in the future, I plan to release a full album featuring all five songs from the EP along with instrumental versions," said Pinnock.

He added, "I created this EP to help students with their studies. Each song on the EP is a motivational song. I also hope that more teachers will start to use music in their classes to help students to learn more."

Pinnock has been advocating for the use of reggae music in the classroom to help students excel in learning mathematics since 2014.

He is the pioneer researcher on mathematics anxiety reduction in the Caribbean.