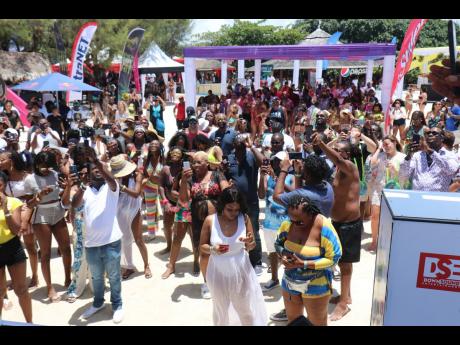 Organisers of major events across Jamaica have been facing hard questions as to whether or not they should carry on their shows as planned. And some have answered.

Yesterday, the organisers of BRT Weekend, slated to start this Friday, March 13, and end on Sunday, March 15, in St Ann, were saying "all systems go".

However, after much deliberation over the risk factors associated with public gatherings and the spread of COVID-19, the organisers have declared "all systems no".

"We are aware that there are persons already on the island who may have purchased tickets for our events, and so we encourage them to reach out to us to discuss potential solutions," said Denise Dixon, the PR representative. "Our decision to postpone the event until the Emancipation Weekend, July 31 to August 2, was made late yesterday evening after a long meeting to discuss the risks. All tickets purchased for BRT Jamaica (as well as Turks and Caicos) will be honoured for the rescheduled dates or for the other 2020 stages of BRT Weekend."

Meanwhile, Frenchmen Soca Season organisers have announced the complete cancellation of events, including the popular all-inclusive breakfast party Rise Up in St Ann, and the annual soca fete Blocko, which were slated for Saturday, April 11 and Thursday, April 16, respectively.

"It wasn't a hard decision to make. We've been creating unforgettable experiences for our Frenchmen family for 25 years and we'd rather cancel our entire Frenchmen Soca Season than risk the health of our patrons. They have been, and will remain, our top priority," Cheraine Marshall, digital and PR manager for the event explained to THE STAR.

Their weekly Lyme, which would have kicked off yesterday, has also been cancelled.

Meanwhile, Prime Minister Andrew Holness declared that no new gatherings that require permits would be granted over the next 14 days, and that those permits that had been granted for the next 14 days have now been revoked.

Organisers of UWI Carnival, also scheduled for this weekend, have postponed it. Other festival organisers, including those of Reggae Sumfest are putting their patrons at the fore.

Director of Reggae Sumfest Josef Bogdanovich said: "As we approach Reggae Sumfest 2020, we the organisers recognise that coronavirus is a legitimate health scare and though it doesn't do well in temperatures of 260 Celsius or 780 Fahrenheit, we want to ensure we do the best we can for our patrons safety."

Still, no drastic decisions are being made to postpone or cancel the festival, which is set to happen at the Catherine Hall Entertainment Complex in Montego Bay.

Instead, the director expressed that precautionary measures would be made in light of the growing concerns about the spread of the virus.

He also urged vendors and patrons to play a part in preventing the potential spread of the virus by arming themselves with hand sanitisers and alcohol which will also be made available at the venue.

"Hand soap and paper towels are constantly stocked in the washrooms and available to all vendors. We will be installing hand sanitisers and alcohol at key points throughout the venue," he said. "There will be a nurse to take a digital temperature quickly. If a person is not well they will be taken to an on-site medical team."