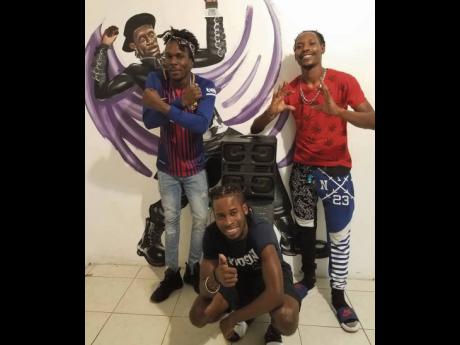 As some consider the local entertainment industry and its extensions comatose, suffering its own symptom of the COVID-19 pandemic, there are others like Belleh23 Creative Guest House, innovatively insisting that 'Dancehall Cyaa Stall'.

Today (Wednesday) at 1 p.m., the one-stop creative shop will host the first edition of the #DancehallCyaaStall Live Stream Class, led by Pops Xclusiv, Joel Immortal and Omar Cleanstep. "We're getting creative with this dancehall live stream, and the community has really been responding. A lot of the world is on lockdown right now and they want things like this to do," Belleh manager Sanjay Ramanand, told THE STAR.

And considering Ramanand's television production background ( Digicel Rising Stars, Intense), he is confident the team is ready to put on a valuable show. "We've been able to work out the kinks to deliver a really good live stream that, hopefully, people will feel good to pay for. Hopefully, this can be a recurring thing, whether weekly or however often it turns out to be," he said.

Like a true entrepreneur, Ramanand hopes that the live stream could become an additional revenue stream for the creative guest house, as their visitors, classes and excursions are paused for the foreseeable future. "Ultimately, everybody just has to get really creative. Belleh23 has been doing well with the niche we have. Like most endeavours, you have to develop a reserve, so we're now gonna have to rely on those reserves," he said.

But the Belleh team is hopeful because of a positive social media response. "The flyer got almost 500 likes, and a lot of comments. Anybody who has posted a flyer on Instagram knows how hard it is to get likes on a flyer on Instagram," Ramanand reasoned.

He continued: "They really like it. It just seems like the timing was convenient. It's a product that the community is ready to consume. I'm sure there are others who are maybe just interested in dance in general, and may be looking forward to stuff like this."

While Belleh23 is preoccupied with dancehall, Ramanand is pretty sure that creative thinkers in other dance genres, like kizumba, ballroom or hip-hop, are also setting up their own virus-inspired activities. "I'm sure they're doing their own versions of this, but the dancehall community has been readily consuming this product. The whole community has been really responsive," he said.