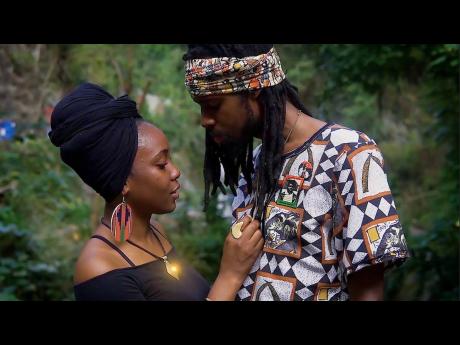 Autarchii (right) interacts with an actress in a scene from the music video for ‘Black Beauty’.

Reggae singer Autarchii says his recently released single titled ' Black Beauty' is more than just a song; he describes it as an allegory of African love.

"This song is dealing with the topic of African love, which is something that the Eurocentric media has always tried to suppress. The song highlights the powers of a woman with melanin, the more she embraces her African identity the more attractive she becomes," he said. "The ultimate aim is to unite the African family leading to true empowerment. I toured Kenya last autumn. Since then, I have been even more connected to the land of my ancestors, and this song is a true homage to Africa and its people."

Black Beauty will be featured on Autarchii's sophomore album, 2000 Years: The New Faculty Of Interpretation, slated to be released this summer.

"Since it was released, Black Beauty has enjoyed positive support from DJs in several African countries. It has also been included on a plethora of mixtapes in Kenya and other African territories," said Autarchii.

Autarchii recently shot a video for Black Beauty, which was released on May 1.

"I want to use the video to capitalise on the momentum that the song is enjoying in Africa. It's a very good video, it highlights the theme of the song well. I have to give thumbs up to Quest Media for doing a great job on this project," he said.

Autarchii, given name Jermaine Joseph, is known for songs such as State of Mind, Cure My Pain and Land of the Free.

He is the founder of the Youths Today Scholarship and also 'Entrepreneurship Meets Live Music', an event designed to boost self-reliance among black youths.