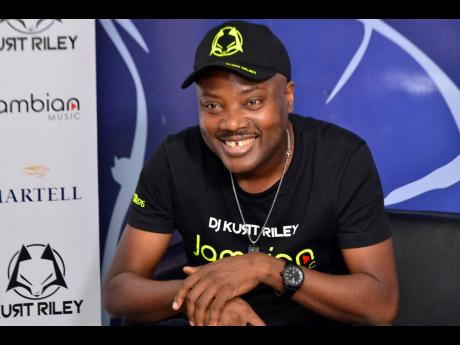 "Dem string me up like Bass Odyssey boom box in a Grand Market," said a cheerful Kurt Riley about his experience of being hospitalised recently, while at the same time saying that it was not a laughing matter.

The popular entertainment figure and son of legendary music producer Winston Riley spent 19 days at the University Hospital of the West Indies (UHWI), a week of that in the Intensive Care Unit where he was receiving blood and medication through IV drip.

News started to circulate that Riley had been diagnosed with COVID-19, but turns out the illness was related to complications with his liver.

"I was dealing with severe food poisoning and dehydration, that's what kick it off. Then after having been wet by rain, it was worsened with flu-like symptoms. It all happened so fast. When I called my neighbour, Dr Loney, to take me to the hospital, I thought I was going to be there for the most, two days," Riley told THE STAR.

He continued: "It was a life and death situation, and where I went people don't come back from there. Strangely, I was so unaware of it all. I am not sure how long my body was dealing with this, because I was drinking alcohol whole heap, but one of my saving graces was that I was naturally eating healthy. Everything about the struggle my daughters went through to find a specialist, all the work it took to bring me back, I don't remember."

Riley's diagnosis was alcoholic hepatitis and pancreatitis, with multiple organ failure, but he has no recollection of it. He said being in a hospital during a pandemic is mentally exhausting.

"I thought I was losing my mind to the point where I had to ask someone to remind me who Kurt Riley was. I didn't know myself, I actually couldn't spell my own name," he said.

Riley said he is most grateful to the frontline workers for their dedication to his case and toasts them, his family and supporters, with water of course.

"I don't know how the nurses and doctors who expose themselves daily do it. I have a new-found respect for them. They are the true heroes," he said.

Riley also said he is "done with rum".

"Medication wasn't all that helped. I was introduced to water with lime, beetroot sweetened with cane juice. It also had to do with God and the prayers from across the world that were like a tsunami that brought me back from death's door because I don't possess that strength," he said. "I am still currently confused on a lot of things, and I have cried. As a matter a fact, I started to bawl when I received an apology that I did not, in fact, have COVID-19. Yesterday (Saturday) was the first time I was able to bathe myself as there is a nurse taking care of me at home."

His brother Andre Riley, who is also taking charge of his care at home, told THE STAR, "The first time I went to the hospital, I walked right past the bed, I didn't recognise my brother. And I couldn't bear seeing him like that, so I asked the nurse to put the things I carried for him by the bed and left. I got it out of my system that night and made up my mind to be there to push him back to health."