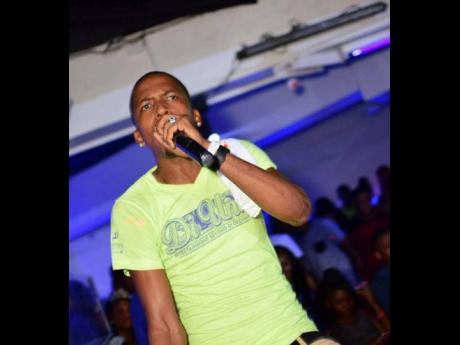 Popular clash selector Badda Bling is warning recording artistes with big egos to be humble. This follows the release of dancehall deejay Intence's latest single Meditation, in which he insults the selector.

But Badda Bling has stressed that there is no ongoing feud between him and any artiste, and "definitely not Intence".

"But that comment is a delayed response to statements made at the Red Bull Culture Clash, where I must have said the artistes my team was put up against wear the same shirt/clothes everywhere," Badda Bling told THE WEEKEND STAR. The Red Bull clash took place last year.

"So, mentioning my name was irrelevant; it is an ill-fated thing in an artiste's career to carry a grudge. We have to be humble in defending ourselves. I never wish no ill on anybody or tell nuhbody bout dem madda, or nothing derogative," he added.

Badda Bling said sound clashes will always produce a negative outcome, though "sound clash or lyrical clash will always be part of dancehall".

"There is negativity when individuals who are not able to differentiate a competition take it personally," he said. "Some dancehall artistes too petty or have big egos, and it is the same ones who get paid to record dubplates dissing a sound system that, at the end of the day, still support dem music."

He also said that his song, Run My Lane, is not a 'diss' track, but a response to Intence that educates all artistes.

"Is not every day I voice, because my primary goal is not to be an artiste. I am an all-rounder; that includes educator to youth, radio personality, selector and, yes, songwriter and performer. I actually tried to get the riddim to do my response like how it was done back in the days when artistes from different alliances would see who could produce wicked lyrics or deep subliminal messages on the same riddim," he said.

Nowadays, dancehall is driven by cliques, so the idea to have competing artistes on a dancehall rhythm does not happen very often.

"It get water down; there's too many people taking sides. I want our artistes and producers who are, or who say they are gaining traction, to look at unuh success and grow by focusing completely on the positive instead of talking about who bad mind, who ah dis or dat. That sorta mentality only draw negative energy on themselves," he said.