Ity pleads with Trench Town to focus on positives 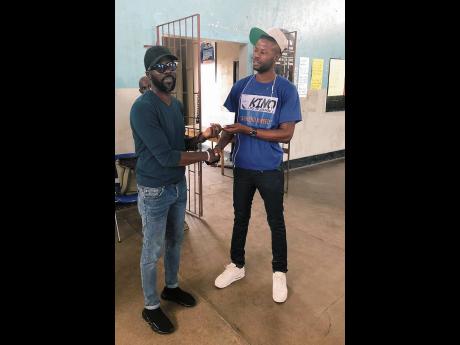 Comedia Ian ‘Ity’ Ellis (left) fulfils his promise and makes a donation to Akino Page, member of The Dream Team. The money came from proceeds of the Christmas Comedy Cook-Up which was held last month.

Almost one month after the Christmas Comedy Cook-up, comedian Ian 'Ity' Ellis made his way to Trench Town to fulfil a promise he made to YouTube star Akino Page, who leads a charity outreach programme there.

Page is a founding member of The Dream Team, which renovates homes of persons in need. They have been doing this despite challenges associated with the curfews imposed recently due to an upsurge in violence in the community.

"I have been trying to go there for more than a week now; we have had to check in to find the right time to visit especially with several roads barricaded and the extended curfew but we were finally able to do so on Wednesday," Ellis told THE WEEKEND STAR. "It is getting better and our prayer is that it continues on that positive path. More than anything else, I am saying to the community spread the positive messages that there are good people and good stories in the ghetto [so] irrespective of what is on the news, we have to continue to support the efforts of people doing good."

The comedy show, which featured local giants like Oliver Samuels and Dahlia Harris, and American comedienne Gina Brillion, was presented in a virtual format. Ellis said that despite not receiving the usual support, "we were still able to follow up with a $50,000 contribution towards building materials as The Dream Team continue their rebuilding project in the community".

Donations of baskets were also provided by Grace Foods to members of the construction team and to Natesha Fearon, a mother of three whose home is currently being renovated. The handover took place at the Boys' Town School and was supported by musical minister Rondell Positive who spoke to those in attendance about the importance of brotherhood and fellowship playing a part in making life better.

Ellis and his colleagues believe the residents are hopeful and are paying attention to dedication of the workmen helping with the rebuilding and think it will help to rid the negative stigma surrounding Trench Town and inner-city communities.

Ellis said: "I am constantly reminded of the positive from the energy that comes through this one team, especially in times where violence is present. The easiest thing for them to do now is for them to stop and say 'listen, we cannot continue this because the violence is prohibitive, it is discouraging us'. But they are determined to give their assistance and complete the task they set out to do. We have to continue to support them as we highlight the good stories."