Sterling, ‘Thank you Lord’ bring Little Lenny back to music 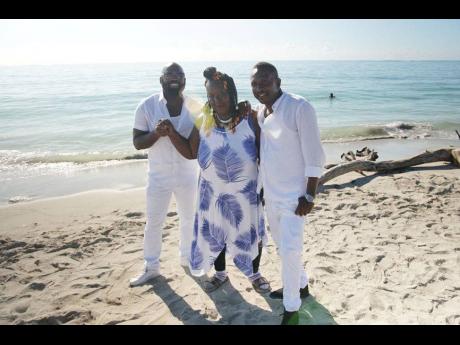 Richie Stephens (left) Yvonne Sterling and Little Lenny on set of the video shoot for ‘Thank You Lord’.

The track, Thank You Lord, was an ode to the spirit of gratefulness as it was birthed from the tremendous outpouring of love and support Sterling received after news spread that she had fallen on hard times. Released on Boxing Day, the single now holds more significance. Not only would it be recognised as the final recording from Sterling, who passed away earlier this week, but it will also be the single that catapults Little Lenny back into the spotlight.

Little Lenny recently told THE STAR that since the single was released, he has seen a renewed interest in his music. He said that recording the single has also re-ignited his passion for creating music and he is therefore looking forward to doing a lot more work this year.

"That song is inspirational in so many ways. I love music and recording that song kinda reinforced just how much. My time in music was cut short because of certain circumstances but I am back in full effect now," he said.

The entertainer, who established himself through timeless dancehall classics such as Gun Inna Baggy, Healthy Body, Boom Flick and Champion Bubbler, said he knows the local entertainment scene greatly respects his talent and contributions. He said he has never felt underappreciated or undervalued.

"I know that now that I am back in full effect and ready to put out some new material, I will have a fan base," he said.

Speaking of new material, the deejay said he has been busy putting songs together as he would be looking to release a "whole heap a music" in short order. He said that the new music could be across both the dancehall and reggae genres. Describing himself as versatile, the artiste says he is more than capable of doing it all.

"I am going to be doing a likkle bit of everything because I am multi-talented. I can do anything, so expect anything," he said.