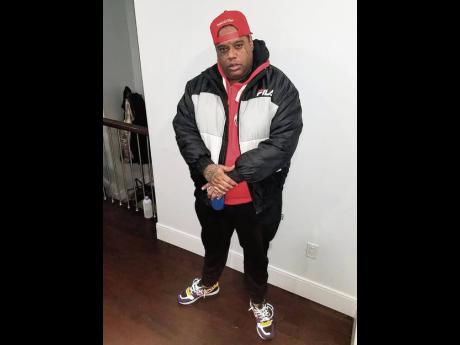 Veteran dancehall personality Sadiki Blackwood has literally been sounding the horn for Jamaica's culture from his days in the streets as a dancer, and now as a recording artiste.

The former member of G Unit dancers, who dons the stage name Sadiki Snowman or just Snowman, is working hard to keep his name relevant in the cold streets of Brampton, Canada, where he has been living for the past four years.

"Ah nuff years me dedicate to dancehall, from promotion with artistes to creating dance moves that turned into hit songs and the slangs it turned into a booming career, one dat still ah boom. Ah 'bout half my life of work, because I'm 41 now, so a more than that," he said.

He added, "Dancing and dancehall really carry me everywhere, and while self-praise is no recommendation, I am somebody weh do whole heap inna di music for so long, earning the respect of the people, so I know I am gifted. Back in the day I used to have a horn. Mi used to get thousands of dollars from deejays just for me to do that inna the streets and pon dem track."

Sadiki Snowman, working with Elephant Man, put Jamaica's dance scene on the map with movements like 'Signal The Plane', 'Higher Level' and 'Hop Di Ferry'. However, his passion for dance, he told Weh Dem Up To, "died with Bogle", referring to the legendary Black Roses Crew dancer.

"Is not like we a family like that but knowing he was killed, a pioneer like Bogle, me keep on a wonder weh dem woulda do me. I really checked for him, Willie and Bogle grow me," Sadiki Snowman shared.

Dancers William 'Willie Haggart' Moore, Gerald 'Bogle' Levy, and David 'Ice' Smith were the Lincoln Avenue-based crew's most popular members. But they were murdered in 2001, 2005 and 2008, respectively. Sadiki Snowman became focused on creating slangs, which earned him the title of 'Slang Master'.

"I felt like it was time to make the younger youths get a piece of the dancing spotlight and work on my other talents, like doing slangs and my latest collaboration is with Ding Dong for Booming I'm booming on the intro and him deejaying which is going to be a hot song for the summer," he said.

Sadiki Snowman is also on productions like Money Maker with Assassin, and Lyfe OG (Life of a Genna) with Aidonia. He says he has been happily married for six years to a hard-working woman who has motivated him to see the other side of the working world.